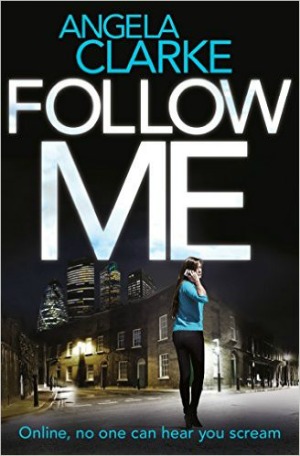 Journalist Freddie Venton is looking for her big break, the story that will catapult her from the non-paying online articles to the front pages of national newspapers. So when she discovers there has been a grisly murder, she blags her way onto the scene.

Police officer Nasreen Cudmore is shocked to find her former best friend on the murder scene she is investigating. Nas hasn't seen Freddie since they were teenagers and she isn't ready to delve back into their past to dredge up the mistakes they made. She isn't happy when Freddie becomes part of the investigative team but when it becomes clear they are dealing with a potential serial killer, she must put her feelings aside and concentrate on tracking them down before they kill again.

I was looking forward to diving into Follow Me after hearing about the book a few weeks ago. The killer in the book - dubbed the hashtag murderer - posts clues about his latest - or next - victim on Twitter and, as ﻿I use Twitter and other social media a lot, I was interested in this angle of the book. I was also intrigued by Freddie and Nasreen's past and what it was that forced such a wedge between their friendship. Although I enjoyed the investigation into the hashtag murderer, I did think Freddie's and Nasreen's past could have been explored further. There are the odd hints that something happened and I expected the reveal to be quite explosive but it didn't quite live up to my hopes and was pretty much brushed under the carpet afterwards.

It took me a little while to really get hooked into the book but once the investigation started to really get going, I was pulled into story and didn't want to put it down. I wasn't entirely convinced that a police force wouldn't have anyone on the team who knew how Twitter worked and therefore needed Freddie on board, but I pushed that niggle aside so I could enjoy the book, which I really did. Freddie isn't always a likeable character; she's bad-tempered, uncouth and doesn't always know when she should keep out of things for her own good - and those around her - but I did like her by the end. She could be frustrating but she could also be feisty when she needed to be as well loyal. Although Nas is a much more restrained character and easier to warm to, I did feel a stronger connection to Freddie as I felt I knew her a lot better than her former friend.

As the investigation moves along, the tension begins to rise, especially as it reaches its conclusion and we find out who the hashtag killer is. The book can be quite chilling at times but there was also a sprinkling of humour, which I think helped lighten what could have been a very dark book. I liked the pace of the book as it is quite fast-paced without feeling rushed, apart from towards the end but this only adds to the tension of the situation of hunting down a killer.