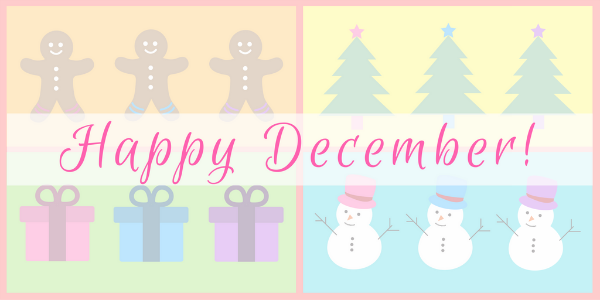 Still too early? Seriously? But it's December!

I LOVE Christmas and have been busy pinning Christmassy things. I've also been bothering my family with festive music for almost a month now (Isobel has already told me she's sick of them and we're only just entering Christmastime. Tough luck, lady).

We went to our town's annual reindeer parade a couple of weeks ago and we've already eaten the giant marshmallows from Manchester's Christmas market, which has become a Joyce family tradition (the actual marshmallows, not the eating-them-early). The John Lewis and Coke adverts have been on and I've swapped my boring socks for festive ones in the drawer, but we've still got lots to look forward to over the next few weeks:

Although I start getting giddy about Christmas as soon as we blow out the candle in our Halloween pumpkin, we don't put our decorations up until mid-December. I've already been to the Christmas shop nearby (pretty much as soon as it opened back in September. I'm not ashamed of this) so I have some new decorations to put on the tree, plus some new Yankee Candle melts. I also bought a few decorations from Florida in October, so that'll bring back some lovely, sunshiney memories. We also have decorations from our Christmas in New York back in 2011, so it's always nice to pull them out of the box and remember the brilliant time we had there.

Loki is our Elf On The Shelf, who visits from 1st December until Christmas Eve. This will be his third year with us and I'm looking forward to his fun and mischief. I'll be sharing our Loki photos over on Twitter and Instagram.

Confession: the Christmas TV guide is one of my favourite parts of the festive season. I like to take my time reading the magazine before circling what I want to watch, deciding what I'll record (and figuring out whether I'll have to catch up on a +1 channel if there are too many clashes). Some people covet presents - I'm happy with a TV guide and a pen!

This has become another family tradition for us over the past few years and it's something we all look forward. Rianne, Isobel and I put on our Christmas jumpers for the occasion too, which makes it even more fun. This year we'll be watching Sleeping Beauty, and I can't wait!

I love a good Christmassy film and even though the Crimbo decs aren't out yet, I do have my DVDs lined up the shelf ready. My favourites include Jingle All The Way, Home Alone (1 and 2) and Arthur Christmas.

Like Christmassy films, I love a good festive read (cheeky plug alert: I also have a couple of festive reads out myself: The Mince Pie Mix-Up and free festive short, A Beginner's Guide To Christmas). I've been meaning to read A Christmas Carol for the past few years. I love watching the films (and especially the musical versions) but I've never got round to reading the book. This year, however, that is going to change as I've finally bought myself a copy!

This is my favourite day of the season (yes, even more so than Christmas Day). I love the anticipation of the big day to come, but it's also far more relaxed than C-Day. It helps that I'm not stuck in the kitchen cooking for hours!

So there's still plenty to look forward to this December. What plans do you have for Christmas? And what are you most looking forward to? Let us know in the comments below 😊
﻿