We've put the half term break to good use this week by doing Halloween crafts. They've all been easy to do and cost very little but the kids (and me) have had fun doing them.

Then we made monsters out of plasticine:

The Jellyfish made different kinds of monsters, from an alien monster in a space ship to a pirate monster 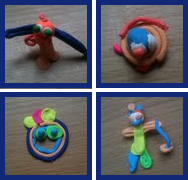 Boo's all had a similar theme...

I also made an evil flower, which came out cuter than intended.

Even the partner had a go and made a Cheesestring monster

Today we have been busy baking and making milk bottle ghosts and funny balloon faces (which were supposed to be monsters but came out looking gormless so they're rebranded).

I saw the milk bottle ghosts on another blog a few weeks ago and can't remember which one so apologies to whoever did it first as I can't link back.

I didn't have any fairy lights to use like in the original so I used battery powered flickering 'candles' instead, placing them inside the pre-prepared hole.

They look much better in real life than in the photo and glow rather than having a big light in the middle.

Lastly (phew), we made funny face balloons for the trick or treaters by drawing eyes, mouths and noses on plain sticky labels and colouring them in

Then the kids stuck the faces on. To finish off I tied string around the bottom and added some leftover monster and alien stickers

The response from the trick or treaters was great. One girl told me it was a good idea and a boy was heard saying 'the sweets are inside the balloon - wicked' once the door was closed so I am very pleased.
Posted by Jennifer Joyce at 23:25

Email ThisBlogThis!Share to TwitterShare to FacebookShare to Pinterest
Labels: Halloween, My Home Life