The Summer of Secrets by Alison Lucy 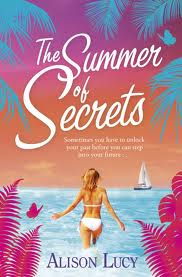 Set in glamorous Mexico, three young women set off on personal adventures. Each hoping to unlock the missing clues that will help them find out who they really are ...
One heady summer. Three big secrets.
1989:
Newlyweds Danny and Harriet arrive at their honeymoon paradise in the Caribbean. Days later Harriet returns home. Danny is left distraught but finds comfort in the arms of two women. Nine months later, three baby girls are born...
2010:
Megan leaves her childhood sweetheart behind in the UK to go in search of her long-lost father. Miles from home and temptation is at every corner - not least in the arms of the gorgeous Ray...
Esmé, a Mexican beauty, married Miguel at fifteen. In unlocking the secrets of her past, can she shed the shackles of her enforced marriage? Claudia has led a life of privilege but she's never really known what it feels like to be loved. Could David be the answer? Or will he disappoint her, just like her mother always did?
Three women set off on an adventure to uncover the secrets surrounding their missing father. It may be the only way to lay their demons to rest but seeking out the truth could tear their lives apart.
The Summer Secrets is full of intrigue as Megan, Esme and Claudia search for their father, Danny Featherbow. Danny hasn't been seen since 1989 and is presumed dead so what happened on the night he was last seen alive?
All three women have been brought up in very different circumstances; Megan was raised believing another man was her father and rebelled from the day she discovered the truth, Esme married a man she didn't love at 16 while Claudia was born into a rich family but lacked any real love.
I loved the journey each woman took to decide she must go in search of Danny. All three have their own issues but I cared about each of them and willed them on in their quest.
The Summer of Secrets isn't just about the mystery surrounding Danny Featherbow; it is about love - or the lack of love - and its complications and consequences. I found it to be a great read and when I had to put it down, I was itching to pick it back up again. This is Alison Lucy's first novel and I will definitely be on the look out for her books in the future.
The Summer of Secrets will be released on 17th May 2012
Thank you to Constable & Robinson for sending me a copy to review.﻿
Posted by Jennifer Joyce at 08:00