The Flavours of Love by Dorothy Koomson 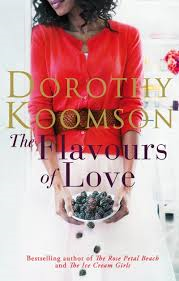 Eighteen months ago, Saffron Mackleroy's life was shattered when her husband Joel was murdered. Saffron has tried her hardest to cope with losing the man she loved but juggling her full-time job with a demanding boss with taking care of her children has been difficult and Saffron has seemingly been going through the motions of life without really feeling anything.
But Saffron is going to have to fight through the fog of grief when her fourteen-year-old daughter Phoebe makes a shocking confession. Saffron finds herself drifting further and further apart from her teenage daughter and she has yet more problems to deal with when Joel's killer - who was never found - starts to write to Saffron.
I've become a big fan of Dorothy Koomson's writing and The Flavours of Love is another reminder of why I love her books so much. The writing is beautiful, weaving poignancy and tension throughout to keep me turning the pages to find out both what happened in the past and how Joel was killed and what will happen next as the family's secrets begin to seep out.
I really liked the character of Saffron and connected with her immediately. She's an ordinary woman whose life has taken an unexpected and horrific turn and she has to somehow keep everything together for the sake of her children, Phoebe and Zane. It is such a lonely and confusing time for Saffron and I felt for her as she struggled with her loss and the new challenges life throws at her. The letters from Joel's killer also creates suspense and an increasing sense of urgency that drew me even further into the story.
Saffron doesn't always have the support she needs, with both her own mother and Joel's parents being distant and negative towards her but she does have Joel's best friend Fynn to lean on. He has been invaluable over the past eighteen months but there are times when Saffron doesn't know who she can trust, not even those closest to her. She also has Joel's Aunty Betty, who I loved. I thought Aunt Betty was a wonderful character who could be wild and out of control and teenage-like in some ways but also loving and wise.
The Flavours of Love had me hooked from beginning to end and I was sad to leave such wonderful characters behind when I finished it.﻿