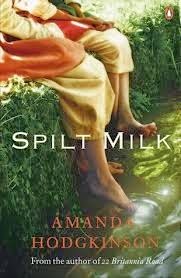 In 1913 sisters Nellie and Vivian Marsh are destined to remain spinsters. They live a simple, impoverished life on the outskirts of a village with only each other to rely on. But then Joe Ferier enters their lives and the fiercely close relationship between the sisters will be shattered, with the cracks remaining for years to come.
In 1939, Nellie's eighteen-year-old daughter Birdie finds herself pregnant. As an unmarried mother, Birdie feels she has no choice but to give the baby up for adoption. To shield herself from the stigma, Birdie goes to stay with her aunt Vivian for the duration of her pregnancy, where she begins to uncover the Marsh sisters' past.
Spilt Milk is told over several decades, beginning with Nellie and Vivian's childhood and moving through to their old age. Part one centres around the Marsh sisters and their meeting of Joe Ferier, who has a damaging effect throughout their lives. I did enjoy this part of the story, but I did think it dragged, especially compared with the second part, which swept through years and generations from one paragraph to the next. I think of the all the characters, I felt for Birdie the most as she suffered at the hands of fate time and again, which made her judgements quite harsh at times.
It was interesting to see how times changed for the Marsh sisters, beginning with such a secluded and hard life at the start of the century, moving through the decades and wars and shifts in attitudes. It was quite saddening to see the gulf in the sister's relationship and how that continued to shape their future and that of their loved ones. Spilt Milk isn't the most cheerful of reads, but I was drawn into the characters and their lives and wanted to keep reading to find out where Nellie, Vivian and Birdie would end up. A slight criticism for me would be the ending as I felt there were a few loose ends I would have liked tying up (but then I like my endings tied up neatly in a pretty bow). Overall, I thought the book was a good read, full of secrets and loss and the fragile ties of family.
Posted by Jennifer Joyce at 08:00