A Place To Call Home by Carole Matthews 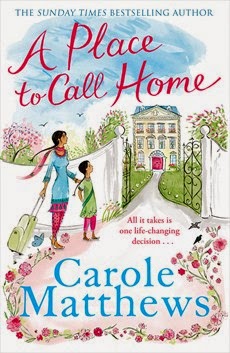 In the middle of the night, Ayesha wakes her seven-year-old daughter Sabina and the pair creep from their home and board a coach for London, leaving Ayesha's husband and their old life behind. They're taken in by kind-hearted Crystal, who provides them with a safe place to stay while Ayesha sorts herself out.
Crystal lives with ex popstar Hayden, who has hidden himself away from the public eye for the past few years, and Joy, a retired woman who prefers the company of her plants to her housemates. Ayesha and Sabina's arrival shakes up the dynamic of the household and they strike up a bond with their saviours, but the threat of their old life catching up with them is never far behind.
I immediately felt for Ayesha as the book began and I learned about the horrific life she has been leading. I wanted her to escape and I was so glad when she found Crystal. Crystal is the complete opposite of Ayesha. She is loud, confident and brash but she is also caring and the pair strike up a lovely friendship. For me, Crystal stole the show. I loved how positive she is, despite all she has been through and I adored her relationship with little Sabina. I thought she was such a fun and vibrant character who showers her new friend with love and loyalty. I also grew to like Joy too. She's a bit prickly to start with, but she too proves to be kind and loyal.
I really enjoyed A Place To Call Home as it was full of fantastic characters and while it was a fun read, it was also an emotional one too that almost had me weeping on the bus (oh, the shame). I liked how each of the characters are struggling in some form or other but, together, they start to work through their problems and create a better life for themselves. They're an unlikely bunch of friends but it really worked for me and their admiration and respect for one another shines through - even when they are throwing jibes at each other!﻿