Sisters of Treason by Elizabeth Fremantle 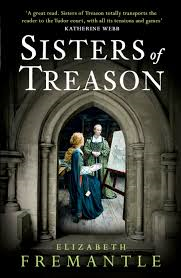 England has been thrown into turmoil with the death of young Edward VI. Lady Jane Green was named as his heir, reigning for just a few days before Edward's eldest sister ousted her cousin and claimed the throne for herself. The new queen Mary orders the execution of Jane Grey and her treacherous father, leaving behind Jane's mother Frances and her younger sisters, Katherine and Mary. All eyes are now on Katherine and Mary Grey, whose Tudor blood poses a threat to Queen Mary.
Having read and loved Elizabeth Fremantle's debut novel, Queen's Gambit, last year, I was excited to get my hands on a copy of Sister's of Treason. Although I knew the story of Lady Jane Grey, I had never heard of her younger sisters, so I couldn't wait to delve into Katherine and Mary's story. We are thrown straight into the drama as we witness the grisly execution of Jane Grey, told through the eyes of court painter and close friend of Frances Grey, Levina Teerlinc. Though their sister and father have been labelled traitors, Katherine and Mary are forced to attend Queen Mary at court. Katherine is more suited to life at court but she often allows passion to overrule good sense, which can land her in trouble, but it was Mary I felt the most for. Mary Grey has a crooked back and is small for her age and is often overlooked as anything more than a pet to amuse the queen. She's an intelligent girl but is treated with distaste at court and I admired her inner strength and her tenacity.
As well as following the lives of Katherine and Mary, we get to know artist Levina Teerlinc. Levina is often called to court to paint the queen and her ladies and she is also a close friend of the Greys. I liked the close friendship she has with Frances Grey and the way she takes Katherine and Mary under her wing, sometimes to the detriment of her marriage.
I thought the writing of Sisters of Treason was superb and I enjoyed the book immensely. I was gripped by the story of the three women and although it felt a bit slow towards the middle, it soon picked up again and I raced through to the end. The book is full of love and has a palpable tension throughout as danger lurks behind every corner. I was quickly drawn into the lives of Katherine, Mary and Levina and didn't want the book to end. But of course the end did come and it was so emotional and bittersweet and I was sad to say goodbye to the characters.﻿