Blog Tour: As Good As It Gets by Fiona Gibson 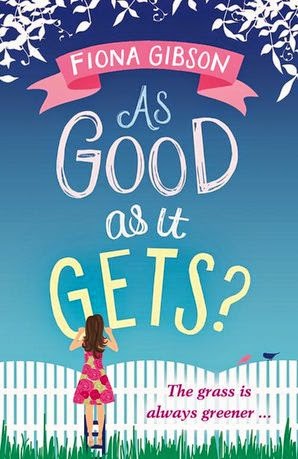 Charlotte used to be a happily married mum of two. But ever since her husband Will was made redundant, their marriage has been slipping. Will doesn't seem very interested in Charlotte anymore and she begins to doubt that he even likes her anymore, never mind loves her.
Charlotte's 16-year-old daughter is spotted by a modelling agency while out shopping and begins an exciting new career, changing the dynamics of the household even further. But Charlotte's family could be thrown into even further turmoil when she's contacted by Fraser, Rosie's biological father. Fraser walked away from Charlotte shortly after she found out she was pregnant and hasn't been seen or heard of since. With Charlotte's marriage seeming weaker by the day, she begins to wonder what might have been if Fraser had stuck around.
I really enjoyed As Good As It Gets, which had me laughing out loud within the first couple of pages - which is always a promising sign! I liked the character of Charlotte, who was very down to earth and doing her best for her family, despite the struggles she and Will are experiencing. There were times when I really felt for Charlotte as the life she has built seems to be moving further and further away from her, but despite all of this she remains quite positive and always full of humour. I liked that Charlotte was an everyday kind of woman; a mum who isn't quite as perky as her younger self who is juggling family and work life. I found her to be a relatable character and I warmed to her immediately.
My favourite character from the book has to be Ollie, Charlotte's 11-year-old son. He's a smart and cheerful and I thought he was hilarious. I loved the scenes with him and his older sister, Rosie, who is a typical moody teenager. I didn't always agree with Rosie's actions but they were true and realistic for her age.
I thought As Good As It Gets was a thoroughly entertaining read with plenty of humour and warmth. The writing was light-hearted and the varied characters kept me engaged throughout.