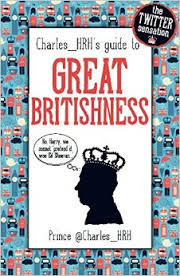 Popular parody account, @Charles_HRH has been unleashed beyond Twitter with his very own guide book, giving advice on all things British. The Royal family, London Underground and Britain's diverse culture is covered within the pages.
I've been following 'Prince Charles' on Twitter for quite a while, so I was excited to learn that there would be a book released and hoped it would be as funny as the tweets - and I wasn't disappointed. The book is hilarious (unless you're French. Charlie likes to poke fun at the French at every opportunity) and I laughed out loud A LOT.
The book is divided into seven chapters, covering everything from the history of Britain, the royals and government, culture and daily life, capital cities and the best of British, so there is plenty of scope for a good old piss-take. Some of the facts and advice were questionable but it is all very tongue in cheek and made for such a fun and witty read. I read the whole book in a couple of (immensely enjoyable) days.
Great Britishness isn't my usual kind of read (it doesn't have an actual storyline, which is usually pretty important to me) but I loved it.  The book is divided up into bite-sized sections so you can easily dip in and out (but I found it difficult to put down and read pages and pages at a time). It's such an amusing, quirky read.If you're a fan of the Twitter account, you'll love the book. And if you're not following @Charles_HRH, why not? Go and follow and then enjoy the book!﻿