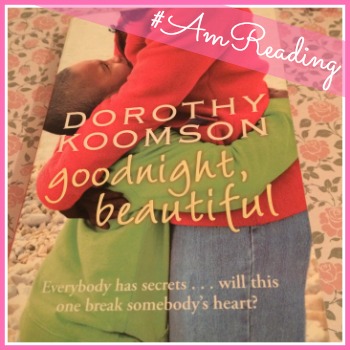 Back in 2011 I read Dorothy Koomson's The Woman He Loved Before - my first book by this author but definitely not my last. I loved everything about the book - the beautiful writing, the gripping storyline that had me hooked - and decided I needed to read more.

I read (and again, loved) The Ice Cream Girls next. That settled it - I needed to catch up on all of Dorothy Koomson's books and that's what I've been doing ever since. I bought the entire backlist but rather than gorge on them all at once, I've stretched them out, treating myself to one of Dorothy's older books as well as reading her newly-released books.

And now I'm reading Goodnight, Beautiful. I started the book yesterday and I'm already hooked. I love Dorothy Koomson's writing and always find myself being quickly drawn into the lives of the characters and desperate to know what their stories are. I think it's safe to say that Dorothy Koomson is one of my favourite writers. If she published her shopping list, I would read it!


Nova Kumalisi would do anything for her closest friend, Mal Wacken. She owes him her life. So, when he asked her to be the surrogate mother for him and his wife, in spite of her fears about how it would alter their friendship, Nova agreed.

Eight years later, Nova is bringing up their son alone, and she and Mal don't speak. Months into the pregnancy, Mal's wife changed her mind about the surrogacy agreement. Already suspicious of how close Nova and Mal were, Stephanie realised her strained marriage was in serious trouble when she found a text from her husband to Nova, saying, 'Goodnight, Beautiful'. She asked Mal to cut all ties with his closest friend and unborn child.

Now, seven-year-old Leo is critically ill and Nova, despite her anger and hurt, wants Mal to have the chance to know his son before it's too late. Will it take a tragedy to remind them how much they mean to each other?