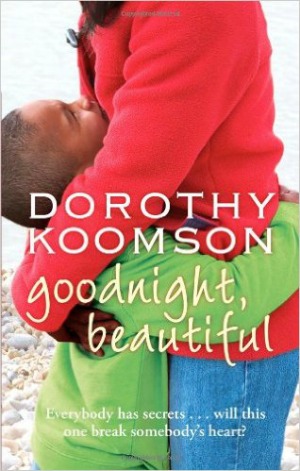 Nova and Mal have been friends since childhood, their families so close they practically merged into one. Nova would do anything for her best friend, a theory put to the test when Mal and his wife ask Nova to be their surrogate. Nova agrees but a few months into the pregnancy, the couple change their mind about the baby.

Eight years later, Nova is raising the son Mal abandoned. Mal cut all ties with Nova and the baby but now seven-year-old Leo is seriously ill in hospital and Nova wants Mal to get to know his son before it's too late.

Dorothy Koomson has done it again. She's made me cry. In fact, I wanted to sob into the pages. Goodnight, Beautiful is a gorgeous but tragic tale of friendship, first love and the bond between mother and child. As usual, Dorothy's writing was beautiful, drawing me straight into Nova's life as she faces an horrific period in her life as she watches her son lying in a hospital bed. The writing manages to be both warm and raw, a powerful mix that gripped me from the start. Even when I knew I was going to be a blubbering wreck, I couldn't put the book down as I was completely hooked. I was desperate to find out everything; what happened in the past and how it was all going to turn out. I was quickly reminded why Dorothy Koomson has become one of my favourite authors.

When I read the blurb, I didn't think I was going to like Mal's wife, Stephanie very much as she is the instigator in Mal's decision to sever his friendship with Nova and sacrifice his relationship with his son. But surprisingly, I warmed to her (although not nearly as much as I warmed to Nova). I couldn't help it. Despite my prejudice, I found myself drawn into Stephanie's life just as much as Nova's and I was eager to find out what had happened in the past to make her hurt so many people. Dorothy manages to create characters you can't help but like and care for, despite their faults, and this happened with both Mal and Stephanie. To begin with, it seems like quite a simple story; Stephanie was jealous and lashed out, causing years of heartache. But all is never as it seems on the surface and slowly the layers of Nova and Mal's story was revealed.

Nova is such a strong woman, dealing with the unexpected destruction of her friendship and dealing with the consequences of Stephanie's decision. Although she is completely knocked down by her friends' actions, she somehow pulls herself through it and I admired her so much for that. She could easily have crumbled but Nova's character shone through throughout. I was captivated by her and her story from start to finish.

Emotional and powerful, Goodnight, Beautiful is a fantastic read. But be warned: you'll probably need tissues. Lots of tissues.
﻿