The Missing by C L Taylor 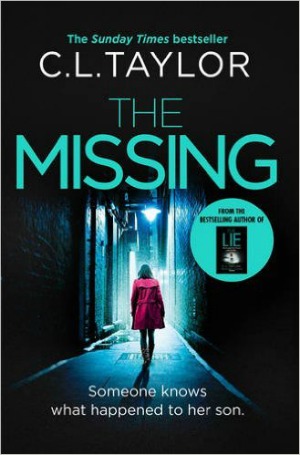 Claire Wilkinson's fifteen-year-old son has been missing for six months. There was no sign of a forced entry or a struggle on the night that Billy disappeared and there have been no sightings of him since. Where is Billy? And could Claire's family or friends - or even Claire herself - know more than they're willing to tell the police?

After enjoying C L Taylor's previous novels, The Accident and The Lie, I was looking forward to diving into The Missing. It sounded like such an intriguing plot and it really was, from the start to the end. Claire's family are struggling to hold it together as they wait for news - good or bad - about Billy and his whereabouts. You can feel the despair from Claire, her husband, Mark and their oldest son, Jake. Each is trying to cope in their own way but there is only so much they can take before they crumble. I really felt for Claire as she attempted to hold her shattered family together, especially when she begins to question the secrets of those she loves the most. I really wasn't sure who to trust as the family's secrets were unearthed.

Most of the story is told from Claire's POV but the chapters are sometimes broken up by an exchange of messages between Billy and an unidentified acquaintance. I liked this aspect of the book as it gives the reader a better view of who Billy is as a person rather than the slightly rose-tinted view Claire has of him. It also starts to build up a picture of what happened leading up to the night he vanished, tantalising the reader and keeping them guessing.

I really enjoyed C L Taylor's writing and found myself fully immersed in the dynamics of the Wilkinson family. At times I sympathised with the characters, at others I suspected they were involved in Billy's disappearance - including Claire herself. One of my favourite characters from the book was Liz, Claire's neighbour and friend. She's pretty blunt but she's also supportive towards Claire, even though she has problems of her own.

I thought The Missing was a great read with enough twists, turns and emerging secrets to keep me hooked.﻿