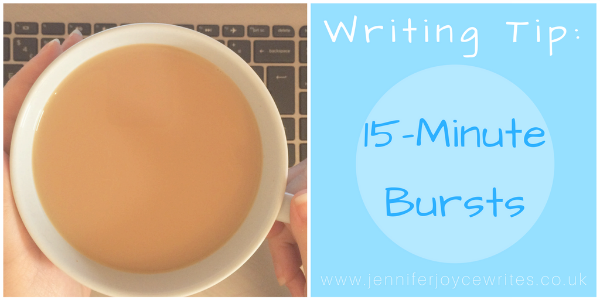 Writing has been a bit difficult over the past couple of weeks; it's the school summer holidays, meaning my writing time is limited, and I've also been in the midst of The Slump.
The Slump seems to happen with every book I write, usually around the 20-30,000 words mark (but can strike earlier or later than this. The only guarantee is that it WILL happen at some point during the first draft). During the horrid slump stage, the words just don't seem to emerge. It doesn't matter that I KNOW what should be happening in the book (I've planned the entire book out this time, right down to individual scenes), the words won't make it onto the screen.
Add to this the fact I have a deadline coming up mid-September, which puts me in a bit of a pickle. I need to write. I want to write. But desk-time is limited and the words are being stubborn. Ugh.
But last week, I discovered a little trick to help the word count rise: 15-minute bursts.
After wasting my precious desk-time faffing about on social media and looking up the outfits my characters could be wearing online, I decided to set myself a timer, where all I could do was write. No 'research', no checking my book rankings, NO SOCIAL MEDIA, LADY. Once the timer was up, I could do all those things. I could leave my desk. I could have a nap.
Okay, I was joking about the nap. It is the school holidays, after all. There is no napping with kids around.
I decided on a 15-minute timer. 15 minutes is nothing, really. It's a measly amount of time, but when you're at the ripping-your-hair-out-in-frustration stage of The Slump, it seems just about manageable. So, the timer was set and off I went.
And do you know what? I was actually writing! Where before I was stuck, now I was typing - and it wasn't a tweet. It was actual words for my book. My characters were active. They were doing and saying. It was a miracle!
The 15 minutes ended and I'd managed to write 394 words.
Now, stop laughing. I know it's a teeny amount. I aim for 2,000 words per day. Less than 400 words isn't going to get me to my 90,000 words goal by mid-September. But this was just the first 15-minute burst. I did this six times throughout the day, totalling 2,241 words - more than my daily word count goal﻿.
I couldn't quite believe it. For the past week or so, I'd been struggling to reach even half of that. Every writing session was a chore. But those 15-minute bursts had really added up, and none of them were daunting or felt like a chore. With only 15 minutes, you have no choice but to just go for it. There's no time for sneaking peeks at Twitter. There's no time for virtual shopping for your characters. There's no time to stop and agonise over the perfect word. You just have to keep going until the timer ends.
Of course, sometimes you do need to stop and look things up online, and you do need to find the right words, but you can do that later. I mark the spot where I would normally stop with an 'xxx' and go back once the timer has stopped. My 15 minutes have ended so I can ponder the perfect prose, or I can look up the ideal outfit my character is wearing for a posh dinner.
Now, I don't always reach my 2,000 words per day goal, but I'm definitely more productive and my steadily growing word count is proof of that and I don't feel panicked that I'm going through The Slump anymore.