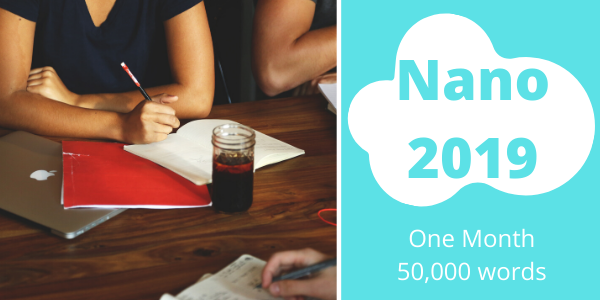 November has passed in a bit of a blur of bashing out words at home and write-ins at the library as I attempted Nanowrimo for the first time. I didn't think I'd be able to manage 50k in a month; I aimed for around 20k per month for my last book as I needed to slow down a bit for my own sanity, but even before that, when I wrote as quickly as possible, I managed around 40k max a month.

But I did it! I reached 50,000 words on Friday 29 November - so I had a day to spare. I don't think I'd have managed to make the 50,000 words if I'd have been going it alone. I usually write during the day - mostly mornings - and only open my laptop at the weekend if I'm nearing a deadline. But with so many words to get down, I had to commit to writing every day (which I mostly did. I had a tooth extracted and when I got home from the dentist, I got into my pyjamas and felt sorry for myself for the rest of the day in front of the telly instead of writing, which I think is totally reasonable). I even made myself sit with my laptop for extra writing sessions in the evenings, which I only usually do when those pesky deadlines are within reach. I know me - I'm a lazy sod - so I know I'd have slumped in front of the telly if it hadn't been for the writing group at the library and our collective Nano attempt. 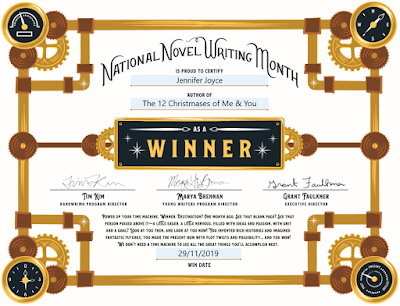 Joining the writing group has been brilliant for me, as it's not only made me push myself, I've also met some other local writers. After our final writing session on Saturday, we went out for a meal to celebrate surviving Nano, which was a lot of fun and a great way to unwind after such a hectic month!

Thanks to Nano, I'm now in the final stages of Book 11 and I'm hoping to have a first draft finished by Christmas.

Did you take part in Nano this year? How did you get on?
Posted by Jennifer Joyce at 10:40