Today I have my very first guest post. Kyra Lennon is the author of Game On, which is out now. 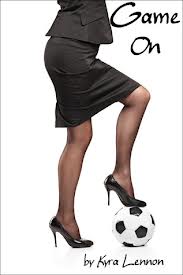 After swapping her small town life to work for one of the top soccerteams in the U.S, Leah Walker thought she could finally leave the ghosts of herpast behind. However, when she meets serial womanizer, Radleigh McCoy, thememories of her old life come swarming back, and she is forced to ask herselfwhether she has really changed at all.

A while ago, you may have seen my post about a terrible first date I went on.  http://kyralennon.blogspot.co.uk/2012/06/girls-just-wanna-have-fun.html I’ve never been very lucky with men. I don’t know why, because I’m pretty confident in who I am, and that’s half the battle, right? But dates always seem to end with a promise about how they’ll call, and they rarely do. The ones who actually pick up the phone are usually the ones I wasn’t that interested in, so clearly, I am doing something wrong.
I definitely don’t come on too strong. I’m pretty shy on dates, so maybe I’m coming across as if I’m not interested. If my quietness seems stand-offish, it probably puts guys off.
My last boyfriend was a couple years ago. We’d been together since college, and I really thought he was the one. But when I got my job with the Warriors, things started to fall apart. Suddenly, he assumed I was sleeping with half the guys on the team. He got real paranoid about it, and we argued a lot. The stupid thing was, I never talked about the team. I think he assumed that I was hiding something, and it was a huge slap in the face to think that, after nine years together, he thought I was capable of cheating on him.
Nine years is a long time to be with someone, only to have it end over something that wasn’t even true. The only good thing to come out of the break-up was that I became really good friends with Will. Will really took care of me, and knew to say sweet stuff about how my ex was probably just intimidated by my new job. Of course, he was only trying to make me feel better, but it was nice of him to make the effort.
Because I got dumped, I got a new best friend. But it’s not the same as having someone to come home to at the end of the day. I hope there’s someone out there for me somewhere.