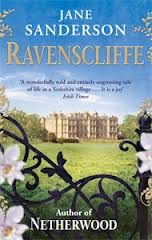 Ravenscliffe, a large, solid house on the Netherwood Common, has stood empty and neglected until Eve Williams and her friend, Anna Rabinovich see the great potential on offer. With a bit of work they plan to make Ravenscliffe a home for themselves and their families.
Eve's business is booming and she is about to marry handsome gardener, Daniel MacLeod but her life is far from idyllic. Just 18 months ago she lost her first husband in a mining accident and she is struggling with the idea of leaving their marital home - and memories of Arthur - behind. Also struggling with the proposed changes is Eve's son, Seth. He is still grieving for his father and the only way he knows how to deal with his feelings is to act out against his mother.
Set in a Yorkshire town in 1904, Ravenscliffe tells the story of both the people of the town and the staff and residents of Netherwood Hall. The Earl and Countess are expecting a visit from the king and the house is in chaos as the staff prepare for their important guest.
There are quite a few characters to get your head around in Ravenscliffe, from Eve, Anna and their children to the people of Netherwood Hall, both upstairs and downstairs, plus the other residents of Netherwood. But soon the characters (and their varied stories) were fully formed in my head and I had no problems keeping up. I was so absorbed with the lives of the inhabitants of Netherwood and they were so real and vivid it was like watching a costume drama in my head.
There are many fantastic characters in Ravenscliffe, whether they are good, honest people like Eve or dastardly like bailiff Absolom Blandford. I really liked Anna, who was so independent and strong-minded and the Earl of Netherwood who seemed kind hearted but my favourite character was the Earl's daughter, Henrietta. Henrietta was much more broad-minded than the rest of her family, doing her best to shun what was expected of her as an Earl's daughter and standing by what she believed was right and fair. She is a strong woman, particularly given her position in society at that time.
I haven't read Netherwood, which is set before Ravenscliffe, but it didn't hinder the story and I didn't feel like I was missing any information. However, as Ravenscliffe was such a fantastic read, I would love to go back and read Netherwood to see how it all began. Ravenscliffe is a well-written and thoroughly researched novel that I didn't want to end so I'm hoping there will be a third instalment set in Netherwood from Jane Sanderson as I'm itching to know what happens next.
Ravenscliffe is out now.
Thank you to Sphere for sending me a copy to review. I will be chatting with Jane Sanderson on Friday.﻿