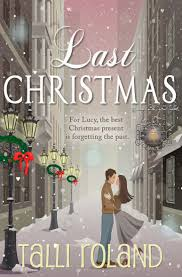 Last Christmas, Lucy was dumped by her long-term boyfriend, Robert. This year, she plans to abandon all the festivities and hole herself up in her studio flat with a bottle of cheap wine. But when she runs into Robert - and his fiancée - and he announces he is getting married on Christmas Day, Lucy finds herself telling a little white lie. She can't let Robert know she is spending the day alone, so tells him she is hosting a huge party.
Once Lucy's work colleague, Mimi finds out, she runs with the idea and Lucy finds herself planning a spectacular party. The party planning helps to take Lucy's mind off the disastrous last Christmas and she begins to wonder if she is finally ready to move on.
As a novella, Last Christmas is perfect for curling up with when you have a free evening. It's a quick read but it's jam-packed with fun and we quickly get to know the characters. I thought Lucy was a great character. Her confidence was obviously knocked when her relationship with Robert broke down and it has taken her a long time to pick herself up, but she finally begins to feel like her old self again once she throws herself into the planning of the party. I also loved Mimi. She doesn't mince her words but she is loyal and clearly cares about Lucy.
If you're looking for a quick but highly entertaining festive read, then Last Christmas is the book for you.﻿