My Summer Reads: The Cake Shop In The Garden by Carole Matthews 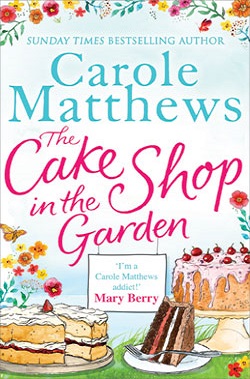 Fay Merryweather was forced to give up her office job with the local council when her mum became ill so that she could care for her round the clock. Although Miranda recovered from her illness, she took to her bed and has refused to re-join the real world ever since. Shackled to the house, Fay sets up a café and cake shop in garden of her canal side home to make some much-needed cash.
Fay takes her responsibilities on the chin, getting on with things without complaint. But when she meets Danny Wilde, a young, carefree man who makes her feel things she's never felt with her long-term boyfriend Anthony, she begins to question the life she has been lumbered with.
I've been looking forward to reading The Cake Shop In The Garden (any book with 'cake' in the title is enticing to me) and I wasn't disappointed. I love the easy reading style of Carole Matthews' books and the way they allow you to relax into the worlds she creates. Canal House and its café sounded like such a wonderful place, with all those delicious cakes and the canal at the bottom of the garden. Reading about all the gorgeous cakes did make me hungry, but it was worth it!
Although I did like Fay, I found her frustrating at times as her mum and her sister put so much pressure - both emotional and financial - on her and I was willing her to stand up for herself more. I really couldn't stand Fay's younger sister, Edie and I was hoping she'd get her comeuppance as she was such a selfish character. On the other hand you have Lija, Fay's assistant at the cake shop and café. While she comes across as abrasive, she's actually loyal and caring underneath the scowl and I adored her. She's such a feisty character and her directness and sharp tongue made me laugh on numerous occasions. I also really liked Stan, a neighbour and daily customer at the café. He was sweet and I liked the friendship between him and Fay.
Although I really enjoyed the book, there was tiny niggle that began to bother me as the book progressed but as it involves a spoiler, I won't say what that niggle was as it would ruin the book for those who haven't read it yet. It didn't lessen my enjoyment of the book as a whole, but it was there in the background for the latter part of the book.
Overall, I thought The Cake Shop In The Garden was a great read with some interesting (and some infuriating) characters. I loved the setting and the array of cakes, not to mention Diggery the dog and his neckerchiefs. It's a perfect read for sitting in the garden in the sunshine. 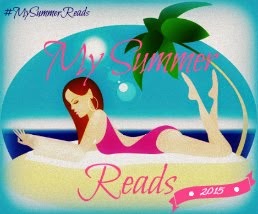 My Summer Reads is a celebration of summer reading, with reviews, giveaways and sunshiny reading habits.
If you'd like to join in, email me at jenniferjoycewrites@gmail.com

You can find out more details here or you can read all 'My Summer Reads' posts
Posted by Jennifer Joyce at 08:00