About Last Night by Adele Parks 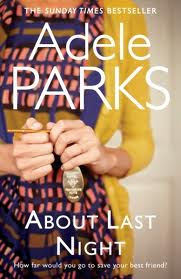 In this compelling novel of friendship, family and trust, Sunday Times bestselling author Adele Parks asks: how far would you go to save your best friend?'I need you to say that I was with you.' For thirty years, best friends Steph and Pip have been through thick and thin. There's nothing they would not do for one another. Until these simple words change everything. Steph, eternally solid and dependable, is begging her friend to lie to the police as she's desperately trying to conceal not one but two scandalous secrets to protect her family. Pip, self-consigned to the role of scatty hot-head, is overwhelmed; she's normally the one asking for help in a crisis. It's a big ask. So what would you do?

About Last Night is set over five days but, despite the short time frame, we get to delve into the lives of best friends, Steph and Pip. The women grew up together but their lives have taken completely different paths; Steph lives in a large house with her successful husband and their three sons and never has to worry about money while Pip is a struggling single parent who relies heavily on her best friend.

At the beginning of the book, Pip's life is starting to take a turn for the better with a revival of a career and the possibility of a love life on the horizon while Steph's idylic world is starting to crumble.

One night something terrible happens and Steph asks her friend to lie to the police and provide her with an alibi.

What is Steph hiding? And will Pip lie for her?

There is a bit of a mystery in About Last Night but I think the book is more about friendship, loyalty and trust. Steph and Pip have been best friends for thirty years but their friendship is put to the test when Steph asks Pip to lie for her. Pip begins to question Steph and what she is capable of so can their friendship survive her lack of faith?

My favourite character in the book was Kirsten. I probably shouldn't have liked her but her trains of thought were so amusing that I looked forward to the chapters centred around her. As a person, she is incredibly self-centred, dismissive and 'a bit thick' but being in her head was fantastic.

About Last Night is an enjoyable read that makes you question how far you would go to protect your friend - and your friendship.
﻿
Posted by Jennifer Joyce at 08:00