I love re-reading books and find it comforting revisiting characters and stories I already know. A bit like watching 13 Going 30 10,000 times (or is that just me?)


I have been re-reading books from my bookcase, one of which was What's New Pussycat by Alexandra Potter: 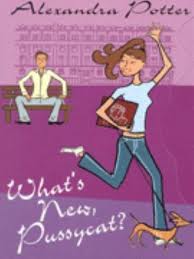 Why, why, Delilah?
Delilah has made a big decision. In fact, she’s made several. She’s leaving Bradford, leaving her boyfriend Lenny, and taking her Tom Jones collection, her pet whippet, Fatso and herself to the bright lights of the big city…
My, my, Delilah…
And now that she’s here, it seems that down-to-earth Delilah is just what the big city was waiting for. But whatever she does, Delilah is determined finally to make the right choices for her future, in love and work. So whether Charlie, the wealthy media boy, or Sweet Sam in his café are right for her is something she needs to decide – on her own. And then she can really start to live …


Delilah once had a dream to go to college and become an interior designer. But then she met Lenny and her dreams were forgotten when they moved in together and Delilah had to drop out of college to earn some money to pay the bills.

Ten years later, Delilah is still with Lenny and still waitressing to make ends meet. When Lenny proposes, she realises how unhappy she is with the way her life has turned out. A brief encounter with tv producer Charlie Mendes forces her to take action. Packing her belongings, including her treasured Tom Jones record collection, Delilah leaves Lenny and their life behind and moves to Notting Hill to try to track down Charlie.

While in London, Delilah meets flamboyant Vivienne and sweet Sam, a cafe owner with aspirations of becoming a chef.

Will she track down Charlie and, if she does, will they live happily ever after?

I bought What's New Pussycat back in 2000 and it was one of the first chick lit novels I read. I was probably first attracted by the cartoon cover and they are still my favourite kind of covers.

Although I'd already read What's New Pussycat, it was a long time ago and it was like reading a new book. What's New Pussycat is a light read full of humour and I found myself more and more fond of Delilah's new flatmate, Vivienne. She is funny, a little bit crazy and most definitely kinky!

I enjoyed rediscovering What's New Pussycat and I really should catch up with Alexandra Potter's other novels.