Close My Eyes by Sophie McKenzie 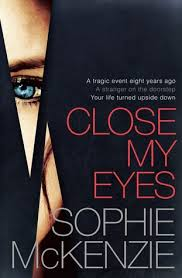 It's been eight years since Gen and Art lost their daughter, Beth. They've tried to move on, undergoing several rounds of IVF but each attempt has failed and Gen isn't sure she can cope with another round. She can't seem to let go of her daughter. It isn't another child she wants - it's Beth.
And then one day there is a knock at the door. A woman Gen has never met before has a shocking claim; Beth is still alive.
The claim is ludicrous but the seed has been planted in Gen's mind. Nobody else believes there is the remotest possibility of it being true but Gen cannot let it pass and begins digging into her painful past, learning along the way that she can't trust anyone, even those she is closest to.
I absolutely loved Close My Eyes and devoured the book in just over 24 hours. I couldn't put it down as I was drawn deeper into Gen's story. She's still grieving over the loss of her daughter so when she hears the news that Beth is still alive, news that is absurd to everyone else, she clings onto it, almost willing it to be true. I felt Gen's frustration as those around her dismissed the idea and refused to co-operate but Gen is determined to discover the truth, with or without help.
Like Gen, I didn't know who to trust as layers of deception are revealed. There are clues and red herrings along the way, keeping the reader guessing until the very end. It's such a fantastic read, full of danger and intrigue as well as Gen's emotions, first the despair at losing Beth and then the hope that her daughter is out there somewhere. I connected with Gen's character and willed her on with her search, watching as she grew throughout the book, emerging from the protective shell she'd built around herself since the death of her child. Gen emerges as a fighter, determined to uncover the truth whatever the consequences. ﻿
Posted by Jennifer Joyce at 07:00