If I Could Turn Back Time by Nicola Doherty 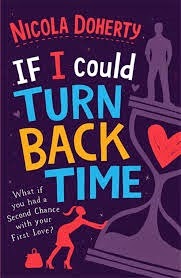 Zoe Kennedy's life isn't going to plan. Her change of career hasn't worked out as well as she'd hoped and she threw away her chance of happiness with the wonderful David Fitzgerald by being needy and jealous of the bond he had with his best female friend, Jenny. But when Zoe makes a wish to be with David again, she finds herself travelling back six months in time, to when her relationship with David was still in tact. Zoe has the chance to do things differently this time so that she and David can live happily ever after.
I've been itching to read If I Could Turn Back Time as I love books (and films) with a sprinkling of magic and I wasn't disappointed. If I Could Turn Back Time is such a fun read and perfect for curling up and immersing yourself in a world where wishes can come true. Zoe felt her life took a turn for the worse when she broke up with David, a handsome and charismatic heart surgeon. By going back in time, she can pinpoint the moments that went wrong in their relationship and play them differently this time, and I loved seeing how the scenes changed with Zoe's new insight.
This is the first book I've read by Nicola Doherty but I loved the writing style, which is light and fun and drew me in immediately, so I'd definitely like to read more. There's a great cast of characters, from Zoe and her friends, to David and the villainous Jenny and Zoe's new flatmate. I think there was a little bit too much emphasis on clothing at times, but as Zoe works in fashion, it is something she would pick up on more, so I could understand why. Overall, I thought the book was a fantastic read. It is light and humorous and I would definitely recommend to any fans of chick lit/romantic comedies.﻿