Today I'm thrilled to be taking part in the blog tour for Paige Toon's Thirteen Weddings. 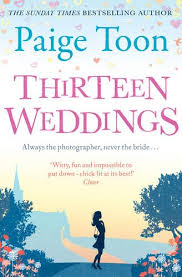 I listened to these songs a lot during the writing of Thirteen Weddings and many inspired scenes in the book. Hope you enjoy the playlist I’ve put together for you…

Because Thirteen Weddings is so bittersweet, with Bronte – a wedding photographer – falling in love with a groom, I found myself listening to a lot of slow songs while writing it. This one gets a mention in the book. It’s the song Bridget snaps at Bronte to turn off because she thinks it’s depressing. I think it’s absolutely beautiful. It’s about a woman who can’t forget the man she can’t have. He regrets something that happened between them, but she’s in love with him and believes he’s hers. It’s Thirteen Weddings down to a tee.

Love Is Blindness by Jack White

This song is on the soundtrack for The Great Gatsby, which I listened to a lot while writing. Baz Luhrmann is one of my favourite directors and always manages to pull together amazing, quirky soundtracks for his films. I imagined Lachie singing this dark and moody version on the evening of Russ and Maria’s wedding when he was really pissed off at Bronte.

Luke Friend was my favourite singer on The X Factor last year, and when I went to download one of his songs from the show, I saw that he had an EP out. I really like ‘Commitments’ and ‘Basically Older’, and I think this cover of The 1975’s ‘Sex’ is great. I also love the original, but it was this acoustic version that inspired the scene where Lachie is singing it and a drunken Bronte decides enough is enough: she fancies the pants off him.

This whole album inspired my writing – I would often listen to it while taking a walking break to help unlock the characters inside my head and get them talking to me. I remember traipsing through a field one day beside a hedge and imagined Lachie peeking through the hedge and scaring the hell out of Bronte. I often think of him when I’m walking beside that hedge now!

This is the song Alex and Bronte danced to in the 80s club when everything kicked off between them. I listened to a few 80s songs to get me in the mood for writing the hen night ‘prologue’. Cyndi Lauper, Kylie Minogue, Madonna – they all got a mention, as did Yazz’s The Only Way Is Up, but I’ve never been keen on that song!

Thirteen Weddings playlist – a few more to add to the collection…

Icona Pop’s I Love It

A note from the author:

Sign up to my book club, ‘The Hidden Paige’, at www.paigetoon.com for free short stories, competitions and the chance to find out more about me and my characters and what we’re all up to.