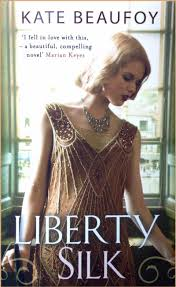 Jessie and Scotch are on their honeymoon, travelling across Italy and France during the early 1920s. Jessie is from a privileged background but has turned her back on wealth to marry artist Scotch. She can live without the luxuries she is used to, as long as she and Scotch are together. But when Scotch disappears one night, Jessie finds herself stranded in France without a means to support herself.
Lisa La Touche is about to fulfil her dream of becoming a Hollywood star. Moving from Britain, a country on the brink of war, to America is a bit of a culture shock but she knows this is what she should do, especially when she falls in love with a fellow actor.
Cat is a photographer in the 1960s, set on changing the world by showcasing her shocking images of war and famine. But it is Cat who is shocked when she learns about her heritage.
Told over three generations, Liberty Silk tells the story of three women who are struggling to find their place in life.
I wasn't sure what to expect from Liberty Silk as I haven't read any novels by the author (who has previously published books as Kate Thompson) but what I found was a beautiful, intoxicating book that I didn't want to put down. I was pulled into the lives of Jessie, Lisa and Cat as their stories unfolded bit by bit, drawing me in deeper with each chapter. Liberty Silk is a poignant tale as the three women, separated by time and miles, try to find their way in life and love. I was completely hooked, gobbling up the pages to discover the fate of Jessie in particular.
A lot of research had obviously gone into the writing of Liberty Silk and it shone through the pages. I loved the descriptions within the book and the mix of different characters - some fictional and others based on real-life people. I never knew what was going to happen around the corner, which twist or turn was going to surprise me next, which kept me on my toes the whole way through. It was an absolute joy to read and it is the kind of book where the characters remain with you beyond reaching The End.
﻿
Posted by Jennifer Joyce at 08:00