The Unfinished Symphony of You and Me by Lucy Robinson 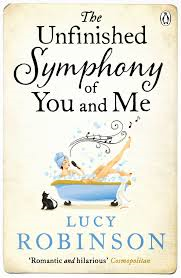 From a young age, Sally Howlett has had a passionate love for opera. But growing up on a council estate, it wasn't something Sally felt she could talk openly about, especially when her parents discouraged any form of performing arts for their daughter. So Sally's love of opera became her secret.
But one fateful summer in New York changes Sally forever. She finds herself enrolling at opera school, going against her deepest fears. But on the night before she starts her course, a man from Sally's past turns up on her doorstep and threatens to unravel her life once more.
I had never read a book by Lucy Robinson before but I had heard such great things about the author's previous books that I couldn't wait to dive into The Unfinished Symphony of You and Me and I wasn't disappointed. It did take me a while to get into the book as I found the leaping around from past and present a bit confusing, but as the book went along it became much clearer to me and I could grasp what was going on. From then on I was hooked and didn't want to put the book down as I was so enthralled with the stories of Sally, Fiona and the man from Sally's past.
The Unfinished Symphony of You and Me is full of flashes of hilarity and I found myself laughing out loud often. I wasn't sure how I would fare with the book and my lack of knowledge of opera, but the musical aspect of the book wasn't a challenge at all. There is a huge mix of characters in the book, from Sally and her cousin Fiona to their friends Barry (who I at times loved and at others wanted to tell him to keep it zipped) and Bea to Sally's new opera friends, Helen, Violet and Jan Borsos, who was my favourite character of all. I thought Jan Borsos was such a fun character whose grasp of the English language caused the majority of my laugh-out-loud moments. He was a fantastic character with a colourful background and while he was funny, he had sweet moments too.
The Unfinished Symphony of Me and You is a fun read but it is also a bit of an emotional rollercoaster too. We know something happened in New York, something that changed Sally's outlook, but we don't know exactly what happened until all the pieces are put together, which made an intriguing read for me. I also felt deep sympathy for Sally and the relationship she had with her parents and hoped that it could somehow be resolved. ﻿