The No-Kids Club by Talli Roland 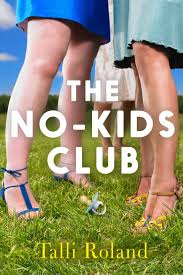 Thirty-nine-year-old Clare is fed up of people trying to persuade her to give motherhood a try. She doesn't want children and never has done. All around her, people are having babies and, worst of all, talking about them. Clare craves conversation about non-baby topics and to be able to stay out with friends past eight o'clock without having to schedule babysitters. So she decides to set up The No-Kids Club to meet like-minded people.
Anna prides herself on her ability to run a smooth household. She and husband Michael don't want children as they are happy as they are. But are they truly happy? Anna is beginning to feel she is the only one putting any effort into their marriage and while having a baby won't fix things, she and Michael need to do something to get back on track. When she sees an advert for The No-Kids Club, she decides to give it a go.
Poppy and husband Alistair are desperate to be parents but so far their attempts at IVF have been unsuccessful. Poppy goes along to The No-Kids Club in the hope of making new friends without the heartache of hearing about adorable children and pregnancies.
The three women have very different opinions of relationships and families, but they do have one thing in common - their child-free lives.
I've been looking forward to reading The No-Kids Club and it was definitely worth the wait. I enjoyed getting to know Clare, Anna and Poppy and while I did expect them to strike up more of a bond, I did enjoy their individual stories. I felt for Poppy as the chance to carry a baby of her own slipped further and further away and while her actions weren't always the wisest, I could understand the measures that she went to. I could also understand Clare's stance on not wanting to have children and felt her frustration as society looked upon her as strange for not wanting to procreate. For me, one of the most interesting characters was Anna. She came across as a bit of a pushover, with her husband making all the decisions while Anna ran around after him and I was waiting for her to wake up and realise she was worth far more than that. I was willing her to stand up to Michael and make him realise that his behaviour was unacceptable.
I loved Talli's writing style as it had an easy flow to it and I felt like I really got to know the characters. I read the book quite quickly as it is such a fun read and I wanted to see how it would all pan out for Clare, Anna and Poppy.
I really enjoyed reading The No-Kids Club. It's a light, fun read that is perfect for some summer reading. ﻿