Today I'm thrilled to be taking part in the blog tour for Miranda Dickinson's I'll Take New York, with a review of the book! 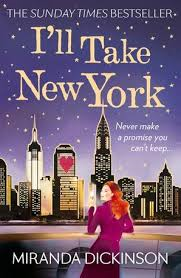 Brooklyn bookshop owner Bea James is tired of being let down by her boyfriend, Otis. When he fails to turn up to dinner with her family - at an event that he planned - Bea decides she has finally had enough and ends their relationship.
Psychiatrist Jake Steinmann has recently split up with his wife, Jessica and, as divorce proceedings begin, he moves from San Francisco to New York, where he grew up and his brother still lives. When he meets Bea at a party where they are the only single guests, they make a pact. They've both been bruised by their past relationships and decide the best option is to stay single.
I was excited when I heard that Miranda was writing a sort-of-sequel to Fairytale of New York as I'd loved the book (plus it was the first book I read on my Kindle, so that makes it extra special). I couldn't wait to read the book and I wasn't disappointed! While this book focuses on Bea and Jake, we catch up on what Fairytale's Rosie and Ed are up to now, as well as their friends Celia and Marnie. It was great to catch up with some familiar characters while getting to know some brand new ones too. I immediately warmed to Bea and I felt her frustration as she is let down by her boyfriend for the final time. I thought she was a great character full of warmth and wanted her to find the happiness she deserves. Another character I really liked was Bea's grandmother who is back at home in the UK in her own bookshop. Grandma Dot is such a fantastic, wise character and I would so like to curl up in Great-Gramps' chair with Grandma Dot's secret stash of sweeties!
For me, New York itself was a character and you can feel the vibrancy and quirkiness of the city through the pages. Bea and Jake both adore New York and their passion for their city shines through. Within the city, we have the fabulous location of Bea's bookshop as well as a return to Kawolskis, Rosie's flower shop from Fairytale of New York.
I loved Miranda's writing style as I instantly found myself immersed in Bea and Jake's world, relaxing as the words and the city took hold. I thought the book was a gorgeous, heart-warming read full of romance and captivating characters and settings.