On Strike For Christmas by Shelia Roberts

Today I'm pleased to be taking part in Sheila Roberts' blog tour with a review of her festive book, On Strike For Christmas. 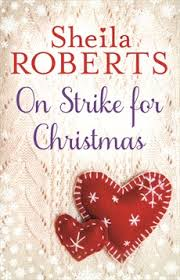 Joy loves the festive season, from baking cookies to making bonbons with her daughter and the family gatherings. But her husband, Bob doesn't share her enthusiasm for Christmas. Especially the family gatherings, which he finds tedious.
Fed up of her husband's bah humbug attitude, Joy decides to go on strike over the festive period, leaving all of the plans to Bob. Joy hopes that being responsible for their Christmas will ignite a love of all things festive in Bob - or a tolerance at the very least.
When Laura, a friend of Joy's through their knitting group, learns of Joy's strike, she decides to join in too. Laura has the opposite problem to Joy; her husband, Glen loves Christmas and socialising but the problem is, he leaves everything, from the planning to clearing up afterwards to his wife. Laura is fed up of entertaining Glen's guests. If he wants to throw parties, he can plan and execute them himself!
With Joy and Laura on strike for Christmas, word begins to spread, first through their knitting group and then through the whole town. With the town's women on strike, will lessons be learned? Or will Christmas be a complete disaster?
On Strike For Christmas is a fun read that explores the stereotypes of Christmas. Christmas preparations are often seen as 'women's work' and the women of Holly are tired of being the ones solely responsible and take action. It was fun to see what would happen once the women took a back seat. Would the menfolk triumph? Or would the women take the victory? Throughout the book, the balance shifted between the two and I liked that it wasn't a book completely slating men. In fact, the women of the town had just as much to learn as the men. The men in Holly could be pretty sexist at times, often referring to 'chicks' and 'chick's work', so I enjoyed seeing their comeuppance when the Christmas load was dumped on their shoulders and they were forced to live the lives of their wives and partners.
As well as the women striking, we also have the story of Carol, a fellow member of Joy and Laura's knitting group. Carol has been widowed for a few years and still can't bring herself to celebrate Christmas without her husband. So she is angry that her friends and neighbours don't appreciate what they've got. Although I found Carol could be quite a self-righteous at times, I did start to warm to her character more as the book moved along and we got to learn more about her and the charity work that she does. My favourite character from the book was Glen, Laura's husband. He really does try to fill his wife's shoes while she is on strike but he can't seem to stop disaster after disaster from striking.
On Strike For Christmas is full of character and Christmas spirit. It's ﻿a real battle of the sexes with a festive twist!
Posted by Jennifer Joyce at 08:00