Blog Tour: His Other Life by Beth Thomas

Today I'm delighted to be part of the blog tour for His Other Life by Beth Thomas, with a review of the book. 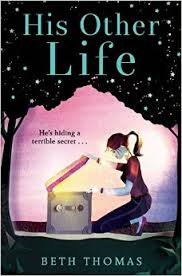 To the outside world, Grace and Adam have the perfect marriage, with their lovely suburban house and cosy nights in. But Grace doesn't know very much about her husband prior to their meeting. He's secretive and doesn't seem to trust Grace at all.
But one ordinary night, Adam disappears and as Grace tries to track him down, she begins to piece together her husband's past and discovers who the man she married really is.
I was intrigued by the blurb of His Other Life and couldn't wait to get stuck into the book. I was immediately wary of Grace and Adam's so-called perfect marriage as Grace is already suspicious of her husband's activities (and who wouldn't be when their husband refuses to reveal anything but the very basic facts about themselves?). Grace has become quite obsessed with Adam's phone, itching to get her hands on it to have a snoop, so it is obvious that all is not well within their household.
I warmed to Grace immediately and thought she was a fantastic character. She's so warm and funny, despite the circumstances that she finds herself in and I couldn't help feeling sorry for her as the details of her marriage unfold. I could feel the hurt and disappointment she feels over her marriage and I was hoping that Adam would be found so that he would be forced to face up to what he has put Grace through.
As well as Grace, there are lots of brilliant character in the book, from her best friend and fellow costume shop employee Ginger to Ginger's policeman brother, Matt and Grace's parents. One of my favourite aspects of the book is the relationship Grace has with her siblings, Lauren and Robbie. As soon as she returns home, they seem to revert back to their old teenage selves, with name-calling between them, which I found hilarious.
For me, His Other Life was almost a cross between a psychological thriller and chick lit, with suspense, twists and turns as well as plenty of warmth and humour. It isn't as dark and intense as you would expect from a thriller to be but there was enough intrigue to keep me turning the pages. I really liked Beth Thomas' writing style and found myself devouring the pages. It's a witty but intriguing read and I enjoyed it very much.