The A-Z of You and Me by James Hannah 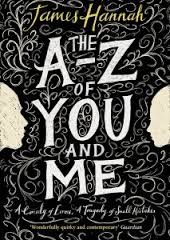 Ivo is lying in a bed in a hospice with little to occupy his mind. So his carer Sheila suggests he plays a game of hers where he should compile an A-Z list of body parts and think of a story to fit each. Ivo begins with A for Adams Apple and from there, as he continues through the alphabet, we learn the story of Ivo and the girl he loves.
The A-Z of You and Me is James Hannah's debut novel, so I wasn't sure what to expect from this new writer, but I was looking forward to diving into the book. And dive I did, barely coming up for air. I was quickly drawn into Ivo's story and that of his friends and the love of his life. It's quite a bittersweet novel, with fun, laugh-out-loud parts (courtesy of some of the alphabetical body parts) as well as a highly emotional tale. I quickly read the whole book and by the end I was in need of a box of tissues and somebody to hold me.
James Hannah's writing style is quite quirky but I soon grew to love it and I found myself easing into the story almost immediately. It's the kind of book you pick up for a few minutes and before you know it half the day has flown by as well as a couple of hundred pages. I couldn't seem to stop reading (which was no hardship, really, despite the emotive subject) as I wanted to find out what had happened in Ivo's past to bring him to the hospice with nothing but a crocheted blanket from his obviously significant relationship. The writing drew me in, teasing with bits of information that kept me reading until I had the whole picture.
I couldn't help feeling for Ivo as his situation became clear, but Ivo doesn't seem to pity himself at all and came across as incredibly brave. Ivo is a flawed character, but he knows this and, particularly towards the ends, makes no excuses for his own mistakes. I didn't always agree with Ivo's actions, but I found his attitude refreshing and admirable. I also admired Ivo's carer, Sheila. Her job must have been pretty harrowing at times, yet she is always upbeat and friendly and I'm not sure Ivo would have coped nearly as well without her support.﻿

The A-Z of You and Me is a touching and poignant read and I'm very much looking forward to seeing what James Hannah has to offer in the future.
Posted by Jennifer Joyce at 08:00