Letters To The Lost by Iona Grey 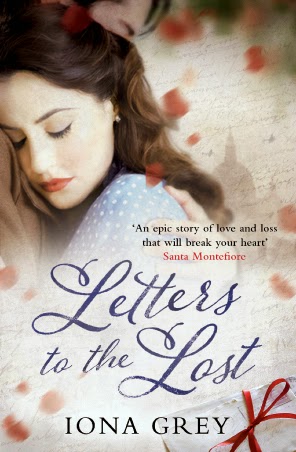 Jess is running away from her toxic relationship when she finds herself hiding away in an abandoned house. She feels bad about breaking and entering, but with little choice she slips inside, only planning to stay until she is safe. But when she opens a letter from America, Jess finds herself caught up in a love story that began sixty years ago. The letter is addressed to a Stella Thorne and Jess is determined to track her down so she can pass on the letter of her lost love, Dan Rosinski.
Letters to the Lost spans the decades, from the war-weary 1940s to 2011. Stella and American soldier Dan meet by chance, falling in love despite their circumstances. Their love is fierce but somehow doesn't survive, as evidenced by Dan's letter in 2011. As Jess delves into Stella and Dan's past, she discovers their heartbreaking story and vows to bring the pair together once again.
I really liked Jess from the start. She hasn't had an easy time of it and she clings to the letters from Dan, as though the lives of the unknown Stella and Dan can provide a distraction from her own life. While Jess shows great strength and independence, there is something vulnerable about her, which made me warm to her easily. She is young and doesn't have anybody to turn to so﻿ I not only wanted her to find Stella to pass on the letter intended for her, I wanted Jess to find some sort of happy ending for herself. When her path crosses with heir hunter Will, I was hoping she would allow her defences to fall just enough to let him in as I really liked Will. Although he is kind and sweet, Will isn't your typical hero as he is riddled with his own insecurities, which only made me like him more. Both Jess and Will are a little lost, so I thought they would be good for each and make a great pairing.
And then there is the story of Stella and Dan. I knew their story wouldn't be a simple, happily ever after sort as we know from the start that they have been parted for decades, with Dan back in America. It was so poignant learning about their past and watching them fall in love as we know the future doesn't bode well for the pair. I found myself totally caught up in their story and could understand why Jess would take on the seemingly impossible task of reuniting them.
Stella's story is so overwhelmingly sad as we watch her marry a man who isn't right for her, just so that she can have the kind of life she has always wanted. Stella doesn't want much from life but a safe, happy home, which she thinks she can have with Reverend Charles Thorne. But Charles has his own struggles and while I tried hard to like him and wanted to sympathise, I found myself hating the man more and more. By the end, he didn't have one redeeming feature, which made his marriage to Stella all the more tragic. While Stella sees hope when she meets Dan, we know that something will keep them apart, no matter how powerful their love is.
Letters to the Lost is the kind of book you can really lose yourself in. You are there with Stella at the village fete, you feel Jess' frustration as her searches come to a dead end and you fear that time is running out for Dan and Stella. Iona Grey's writing has an ease to it but it is also packed with warmth and emotion. Tender and all-consuming, Stella and Dan's relationship will stay with me for a long time.