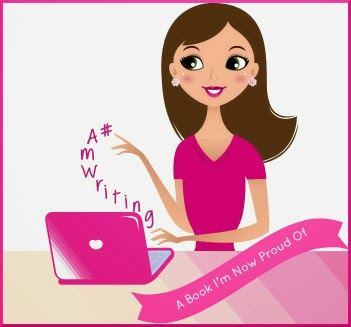 Last month, I told you about finishing Draft 2 of Book 3 (aka the A Beginner's Guide To Salad sequel) and starting Draft 3. And this month I can tell you that Draft 3 is now complete - woo! - and I'm diving straight back in.

This isn't really a 4th draft as I don't plan (fingers crossed) on making any major changes. I want to have one last read-through before I send it off to my editor, to make sure it's as polished as I can make it before I send it on its way for the next stage.

It'll be quite strange sending it away. I've had so much fun writing the book, particularly the 2nd and 3rd drafts and I'm quite proud of the transformation from the pile of crap I ended up with after the 1st draft.

I was quite daunted when I first went into the 2nd draft and, if I'm honest, I'd seriously considered scrapping the whole thing. I felt that bad about it. Although I'd stuck to my plans and wrote what I set out to, it just didn't feel right by the end. It wasn't the story I wanted to tell and I felt like I was letting Ruth down. I loved writing A Beginner's Guide To Salad but its sequel was crap. Pure crap.

After I'd finished the 1st draft, I wrote a festive novella and I was so happy with it. It was fun, which Book 3 seemed to be severely lacking. So I had a good think about how I could turn Book 3 around. I knew I would have to cut a third of it at the very least, taking out one of the POVs and replacing it with another. The rest would need some serious work too, so the whole project seemed overwhelming.

But I got on with. I cut out the crappy bits and rewrote whole scenes. My new character and POV started to shine and I found that I loved discovering her story and it gave me the motivation I needed to get to The End. Luckily a lot of the structure of the novel remained and I worked around that frame to create a book I actually liked and looked forward to working on.

And now this stage of the book is almost at an end. Soon it will be leave my laptop to be edited but I know it will be ready this time. It isn't the pile of poop it once was and is now a book I'd want to read.
Posted by Jennifer Joyce at 08:00