The Lie by C L Taylor 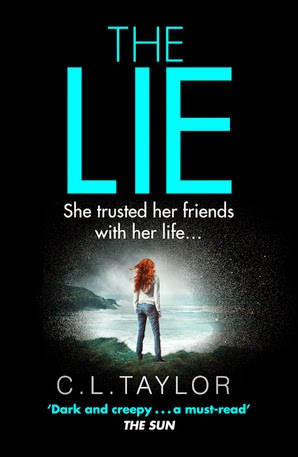 Jane Hughes is quite content with her life. She has a job she loves working at an animal shelter and she's enjoying spending time with her new boyfriend, Will. But Jane's life is based on a lie. Her name isn't even Jane and she has a past she doesn't ever want to resurface. Five years ago, Jane and her three friends went on a trip of a lifetime to Nepal - but the trip soon turned into a nightmare that would change the four women and their lives irrevocably. Jane has built a new life for herself and she is finally at peace, until a letter arrives letting Jane know that the sender knows her real identity. Someone knows the truth about Jane and that ill-fated trip and they are determined to destroy the happiness Jane has worked so hard for.
I read C L Taylor's debut psychological thriller, The Accident last year and really enjoyed it, so I was looking forward to reading The Lie. I was instantly hooked, wanting to know both what happened during the trip and who was sending the notes and hints about Jane's past. The writing cleverly creates suspicion immediately and there were a few people that I mistrusted along the way. I was kept guessing throughout, which made for an interesting and intriguing read. The book switches from the present to Jane's past, which increased the tension and intrigue further. Usually I am swayed by one time period in these situations, wanting to read one more than the other (usually the past), but with The Lie I was equally fascinated by Jane's past and present, eager to find out what would or did happen next.
I liked the exploration of friendship within the novel and how individuals can find themselves placed within a group of friends. Jane is best friends with Daisy and knows the others through her, so her loyalty lies mostly with Daisy, but the dynamics of the group shift and change throughout the novel. My opinion of the women involved also changed as the novel progressed. It was quite startling how quickly the group of supposedly close friends could find itself dismantling and turning into something ugly and dangerous.
The Lie is a tense and at times very dark story and I could feel Jane's loss of control. Delving into Jane's past, we find a disturbing and horrific series of events and although we know Jane makes it back home, I couldn't help fearing for her safety at numerous times. The writing is so evocative that I became totally immersed and didn't want to put the book down. I was completely gripped, itching to know what would happen next.﻿