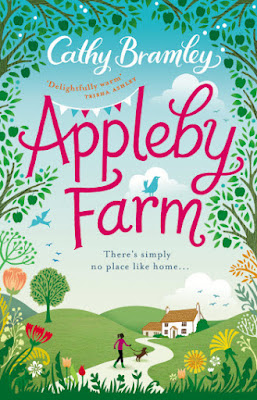 Freya Moorcroft is content with her life in Kingsfield; she has a job she loves and a boyfriend she can see a definite future with. But Freya has never been able to stick at anything for too long and she's starting to get itchy feet. Although she loves her job at the café in Kingsfield, it isn't particularly challenging.
When she receives a phone call from her aunt in Cumbria, Freya is offered the opportunity for a change of scenery. Her aunt and uncle's farm is in trouble with mounting debts so Freya agrees to help out. The charm of Appleby Farm soon grasps hold of Freya. She feels useful and invigorated and determined to save the farm. Leaving boyfriend Charlie behind is difficult, but it won't be forever.
I loved Cathy Bramley's previous novel, Ivy Lane so I was looking forward to getting stuck into Appleby Farm. Although the majority of the book takes place in Cumbria, it was nice to catch up with some of the Kingsfield characters, particularly Tilly, whose story we followed in Ivy Lane. I liked Freya immediately but I have to admit that I was a little dubious about Charlie as his behaviour in Ivy Lane wasn't always admirable. I was glad when this side of Charlie wasn't completely brushed under the carpet in Appleby Farm as his character remained true across both novels.
Freya hasn't had the happiest of childhoods but she is such a positive character and I loved her drive. She doesn't know much about farming but she is determined to help her aunt and uncle in any way that she can. I can see why Freya falls in love with Appleby Farm as it sounds so idyllic and is full of charm. I was interested to see how Freya would try to save the farm and enjoyed seeing how each new idea panned out and whether it would be successful or not.
One of my favourite characters in the book was Lizzie, Freya's new friend from the nearby village. She isn't afraid to speak her mind but she has a softer side too and I thought she provided fantastic support for Freya. I also loved Freya's Aunty Sue and Uncle Arthur. I wasn't sure how Freya's relationship with her parents would work out but I knew that she would always have the love, support and comfort of her aunt and uncle.
Appleby Farm was originally released in four parts and although I read the novel as a whole, I could see how the ending of each part would have you itching for more. Luckily I didn't have to wait and could plough (excuse the pun) straight on!
Posted by Jennifer Joyce at 08:00