The Mistake I Made by Paula Daly 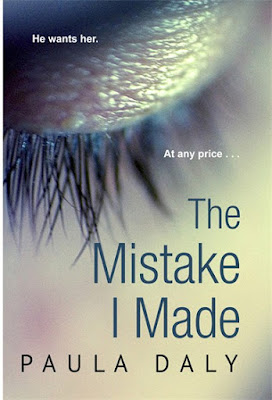 Physiotherapist Roz Toovey is in financial trouble. Her ex husband has left her in debt and isn't paying a penny to help raise their nine-year-old son George. When the bailiffs arrive and take most of their possessions and Roz is threatened with eviction due to her rent arrears, Roz begins to panic. But then Scott Elias enters her life. Charming and wealthy Scott is married to a friend of Roz's sister and offers Roz a way out of all her problems; spend the night with him and he will pay her a substantial amount of money.
Fearing she has no other way out, Roz agrees to the deal and at first it seems like the ideal solution. Roz begins to pay off her debts but then events start to spiral out of her control and Roz can't seem to veer off the path she has set off on, which could have dire consequences for all involved.
I've enjoyed Paula Daly's previous novels, Just What Kind of Mother Are You? and Keep Your Friends Closer so I was eager to start reading The Mistake I Made. As with Daly's previous novels, I quickly found myself immersed in the book. The plot for this book is a lot slower as Roz's struggles are revealed to the reader. I think Roz's situation needed to be covered so in depth so we understand why she takes such drastic measures to earn some money. She really is broke and is set to lose the home she shares with her son. Her ex-husband is infuriatingly feckless and Roz has already borrowed money from her family and doesn't feel she can ask again so Scott's solution seems like her only viable option.
Although I understood why Roz takes the course she does, there were times when I was willing her to put a stop to the increasingly dangerous situation before it got any worse - although this wouldn't have made as big an impact for the book obviously! I was intrigued throughout the novel, always eager to find out what was going to happen next and how Roz would deal with the fallout, which I was sure was on the horizon.
I thought Roz was a realistic, believable character. She's a single mum struggling to make ends meet, battling debt as well as a responsibility-dodging ex-husband. I liked her relationship with her son George and couldn't help feeling for them both as their financial situation worsens. While I didn't find The Mistake I Made quite as gripping as Daly's previous novels, I did think it was a great, well-written read with engaging characters and an intriguing plot.﻿
Posted by Jennifer Joyce at 08:00