Raincoats and Retrievers by Cressida McLaughlin 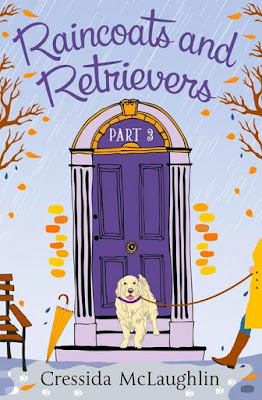 Cat Palmer's dog-walking business, Pooch Promenade is really taking off but she's concerned when she discovers her clients from number 6 are having marriage troubles. Juliette and Will, the owners of a pair of golden retrievers, have been bickering in the street and Cat can't help stepping in to help the pair resolve their problems.
But Juliette and Will aren't the only ones having relationship problems. Cat and fellow Primrose Terrace resident Mark have been tiptoeing around their feelings, leaving Cat confused about where she stands.
Raincoats and Retrievers is the third novella in the Primrose Terrace series and I was looking forward to catching up with Cat, her neighbours and her four-legged clients. I've enjoyed the series so far and I wasn't disappointed with the next instalment. As with the previous parts, Raincoats and Retrievers introduces us to a new set of characters, plus their adorable dogs. Although the book is named after Juliette and Will's dogs, my favourite new furry character was Paddlepuss as he sounded so cute and sweet and I would love to see more of him!
Cat can be pretty nosy at times and she can't help herself stepping in to help - often when the help isn't asked for - but I really like her and I think she has a heart of gold and can't stand to see people unhappy. If there is anything she can do to help, she'll willingly do it.
I don't want to post any spoilers, but I'm loving the romantic elements to Cat's life, especially in this book. There are some great 'will they, won't they?' moments and I'm hoping it turns out the way I hoped it would from Part 1.
Each part has its own individual storyline but there are also threads that run throughout and I'm looking forward to the fourth and final instalment of the series, Tinsel and Terriers to see how it all works out.
﻿