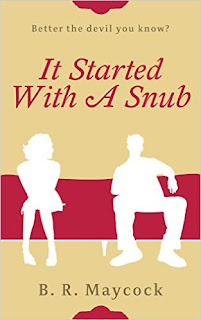 Can you tell us about your book?

It Started With A Snub is a romantic comedy which tells the story of a quirky, happy go lucky twenty-something named Heather as she moves in with four guys, much to the disgust of her boyfriend Graham. It concentrates on each of them and all of them with ups, downs, laughs and shocks galore!

What was your inspiration for It Started With A Snub?

One night while I was binge-watching ‘Friends,’ ‘Big Bang Theory’ and ‘How I Met Your Mother’ the guys jumped into my head and wouldn’t leave until I started putting them down on paper!

What has been your greatest experience since publishing your book?

I’d probably say it was receiving an email from a stranger asking would I think about doing a sequel and saying that some of the characters had jumped into her head a few times when she was reading other books. It really is true that you write just because you have a story or some people in your head that you want to get out, and you hope that others will like them too, but to see it in an eamail or hear it is just something else :) :) :)

Read all around you, it really is reflected in your writing and it teaches you so much. When you’ve ‘finished’ take a step away from it all to let you see it with a new perspective (as long as possible, even months, you can be working away on other things in the background but you need a complete break from the actual piece). Never ever ever self edit unless you’re a qualified editor, you won’t know what you’re looking for. Oh and enjoy it all, that’s why you’re doing it (shuts up and jumps off pedestal)!!!

Definitely would have been a Saddle Club book by Bonnie Bryant, I was a horse addict when I was younger!

Dream A Little Dream by Giovanni Fletcher (would highly recommend!)

I’m working on a book that is the continuation of a short story I wrote for one of the Imagine Write Inspire anthologies ‘Stop Waiting for Friday’ (Carmel Harrington’s writing group which I’m lucky enough to be in) anthology. It’s about a young single mother trying to make it in the working world after she decides it’s time to be a responsible grown up. It’s a romantic comedy with love, friendship and some good old fashioned competition!

You can find out more about B R Maycock and her book on: