On Wednesday, my publisher organised a party for its authors at the office in London. If you read my post in April about attending Kirsty Greenwood's launch party for The Vintage Guide To Love and Romance, you will know that London and I do not get on so well. Mostly because I'm a geography-challenged doofus. Ok, that's the only reason.


But I was excited to go along and meet the other authors as well as the Carina team. The party wasn't until the evening but I set off from Manchester late-morning, giving me plenty of time to find the office and the bar we'd planned to meet up in beforehand. Ha! I had hours to find them - and I used them all up as I got horribly lost. Surprise, surprise, eh?


Despite being given directions, I managed to get the tube to the wrong station and therefore the rest of the directions didn't make any sense. Not realising, off I went and found myself at Tower Bridge. Although I was heading in the wrong direction, this wasn't so bad as I'd never even seen the Thames, never mind Tower Bridge. So I had a good nosey about before I set off in search of the office.


Some time later (like, a couple of hours), I found the office and the bar to meet up with the authors. As I'd never met anybody before, it was nice to meet up before the party and arrive at the office together. The building is amazing and we were 17 floors up with floor-to-ceiling windows displaying the view of London.


There was lots of festive music and big screens displaying our covers (it was a special moment seeing The Mince Pie Mix-Up up there) as well as canapes and plenty of drinks. After only ever speaking to the other authors on Twitter and Facebook, it was nice to finally them in person - as well as my editor, Charlotte.


After being pointed in the right direction to the right station, I made it home without any detours. I forgot to take any photos at the party (it clearly isn't only geography I'm challenged with) but I did take a few of Tower Bridge... 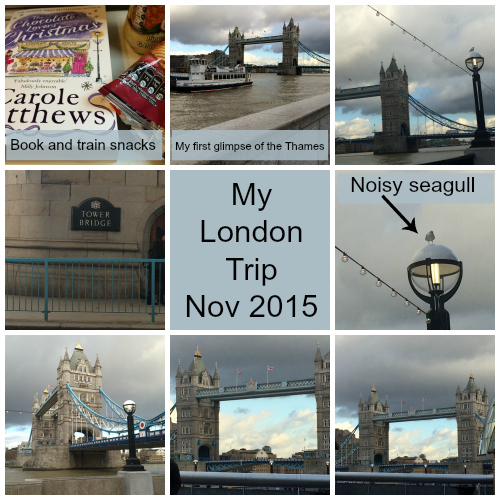