After The Last Dance by Sarra Manning 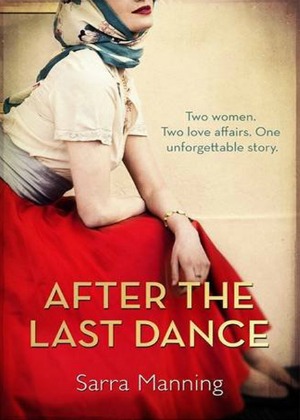 It's 1943 and as war rages on, teenage runaway Rose hops off a train at King's Cross, hoping the capital city will provide a far more exciting and glamorous life than the one she's left behind in Durham. Making her way towards Rainbow Corner, the famous dance hall run by the American Red Cross, Rose forges new friendships and falls in love for the first time. But Rose can't escape the war and the tragedies and heartbreak it brings.

Decades later, Jane bursts into a Vegas bar and ends up marrying the first man she sees. By marrying Leo, Jane is brought into the inner circle of the now old and frail Rose and they will both face up to the secrets of their past.

After The Last Dance is split between the war-ravaged 1940s and the present day and I was intrigued how the two female protagonists would be brought together. Rose is young and naive when she arrives in London but she also has a bolshiness that helps her survive those first few days as a stranger in a new, vibrant city. Fast forward to the present day and Rose is now a wealthy, powerful and often oppressive woman and I was intrigued by her change in circumstance and character. She'd transformed from a pleasure-seeking and hopeful girl into someone self-important and judgemental that I didn't like very much so I wanted to know why she had become so harsh and bitter. The other characters - newlyweds Jane and Leo - were also quite difficult to warm to at the beginning. Both are troubled and selfish but while Jane is superficial and money-orientated, there is obviously something dark lurking in her past that has caused her to behave the way she does and I was eager to keep reading to find out more.

I loved seeing the war years through Rose's eyes as she grows from a teenager to a young woman. Life with rationing and air-raids was harsh but Rose finds solace in Rainbow Corner, which is fun and glamorous and a world away from war-weary London. I'd never heard of Rainbow Corner before but the dance hall really came alive on the pages for me. I was fascinated by the jubilant home from home for the American soldiers and I could see why Rose would find herself drawn to it. Rainbow Corner is where Rose really starts to come alive and where she meets the people who will really shape her life and her future.

There is a lot packed within the pages of After The Last Dance, from a coming-of-age story to an emotional rollercoaster tale of family, friendship and love. The two women's stories are perfectly woven together and although I thought the start was slow, I ended up intently trying to find out what happened to both Rose and Jane to bring them to their present day selves.﻿