As there's only a week to go before the publication of The Wedding Date, I thought I'd introduce you to a few of the book's characters. 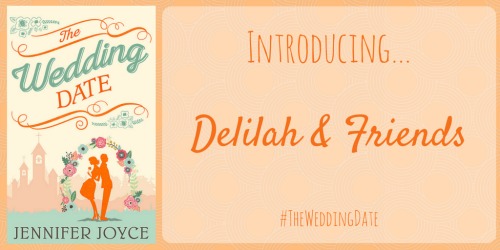 
Delilah is in her mid-twenties and lives at home with her mum, dad and her younger brother Justin, though her living arrangements are due to necessity rather than firm apron strings. Delilah had assumed she would marry her boyfriend, Ben and create their own happy home together, complete with three children and an extensive collection of musicals DVDs. But Ben is no longer her boyfriend. Nine months ago, he became her ex and although Delilah still can't quite get over the shock of their relationship breakdown, Ben has no such trouble and has moved on to pastures new. The bastard. So with her oldest friend's wedding rapidly approaching - where Ben will be the best man - Delilah is determined to bag herself a new boyfriend to prove she's moved on too.


Lauren and Delilah have been BFFs since their first knee-quaking day at high school. Lauren has been single for a while (*ahem* aaaaaaaages) but she's picked up some helpful dating tips during her single days, which she's able to pass on to Delilah. Lauren encourages Delilah to dive back into the dating game, even if she's dated some stinkers in the past.


Ryan and Delilah have known each other for a big chunk of their lives having grown up living next door to each other. Ryan's mum is unbearable (and undeterred) in her quest to match-make her only son with a suitable young lady. Although Ryan can't seem to sort out his own love life, he's happy to help his best friend out - by any means possible.