I hope you all had a wonderful Christmas. We spent a great (and exhausting) week in New York.

﻿
We were up early on 21st for our flight and yet the kids didn't sleep on the flight over. So neither did we :-P

On our first morning, we had a walk to Times Square (our hotel was just around the corner) and saw a real reindeer outside the studio where they film Good Morning America. Times Square was hectic and at times it was difficult to move!
We then went for breakfast and I tried American pancakes for the first time. They are so much better than our pancakes.

We did a lot of walking during our trip as most things were only a few minutes walk away but we did have 'interesting' rides on the subway, from singing Christians and people telling their life stories to everyone in the carriage to getting on the wrong train. In the wrong direction.

There were lots of Christmas trees, including the huge one at the Rockefeller Center as well as giant fairy lights and baubles. Unfortunately I didn't get a photo of the fairy lights lit up at night.
﻿

We took the kids to Macy's to see Santa. The displays while you wait were amazing. There were window displays telling the story of Miracle on 34th Street before you entered a 'train' that took you into a beautiful Christmas land with trees, mechanical animals and a huge sleigh filled with toys.
There was also a lovely window display outside the shop. 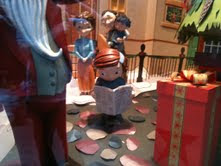 My favourite window display was at Lord & Taylors. The scenes were gorgeous and they also had pictures that children had drawn displayed in frames around the windows. 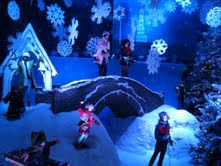 We spent Christmas Day in Central Park and went tot he zoo. My favourite animal was the polar bear. He kept switching between having a nap and having a scratch of his face.

During our trip to the Empire State Building I learned that a 20 minute wait for the lift is preferable to climbing six storeys. It IS that far. Also, it's a good idea to tie your hair back while you're up there. It's very windy and my hair was full of knots afterwards.﻿

One of my highlights was watching Mary Poppins on Broadway with my 8 year old. It was brilliant and the scenery was amazing. We both really enjoyed it.

We all had a brilliant time in New York but I have to admit it is good to be home to have a rest!
Posted by Jennifer Joyce at 15:14