Once More With feeling by Megan Crane 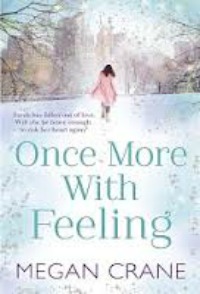 Sarah is devastated when she walks in on her husband with another woman. Apparently Tim hasn't been happy for a long time but he hasn't mentioned this fact to Sarah and she had no idea her marriage was in trouble until she saw the evidence for herself. But even then Sarah refuses to give up on their life together. Sarah and Tim have worked hard over the years to build up their own law practice and create the perfect home in the suburbs and she's sure they can move on, even as Tim starts talking about divorce.
Sarah once lived in the heart of New York, before she married Tim and when her most important relationship was with her best friend, Brooke. Sarah and Brooke were once inseparable but they drifted apart after Sarah married and moved out of the city and somehow years have passed without any contact. Sarah decides to track down her former best friend and when she does it's like no time has passed at all. But Brooke reminds Sarah of her past, of the life she was determined to lead and of the heartbreak she suffered before she surprised everyone by dating Tim, the kind of man Sarah once mocked. Sarah leaves the city feeling more confused than ever. She'd once run away from her life and moulded herself into Tim's world and she'd tried to slot back into Brooke's life in the city but she didn't belong in either world. Sarah must start from scratch and discover who she is and what she wants from life.
Once More With Feeling is the first Megan Crane book I've read but I really liked her style of writing, particularly at the beginning as Sarah tries to come to terms with what she walked in on in her own bedroom. I couldn't help feeling for Sarah and the horrible situation she was in and felt enraged on her behalf but Sarah frustrated me at times too. I wanted to shake her and tell her to stand up for herself and stop allowing her family to walk all over her. Her parents and sister are the most selfish and unsympathetic bunch of people and I think I'd have cut all ties with them rather than try to make them understand!
Once More With Feeling is mostly set over the Christmas and New Year period but I wouldn't really class it as a festive book as the time of year is irrelevant. The story is more focused on Sarah and the turmoil she feels over Tim, especially when Alec is thrown into the mix. Alec is the perfect kind of hero - dark and brooding and more than willing to help take Sarah's mind off her marriage woes.
Thank you to Quercus for sending me a copy to review.﻿