Billy & Me by Giovanna Fletcher 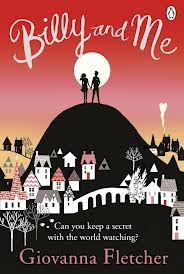 Instead of going off to university or taking a year off to travel the world like her peers, Sophie May decided to stay behind in her small village after leaving school. Not knowing what she wanted to do with the rest of her life, Sophie took temporary employment at a tea shop while she came up with a plan but years later she is still working at Tea-On-The-Hill.
One day, while working at the tea shop, she meets Billy, an actor who is shooting on location nearby. There is instant chemistry between the pair but the relationship doesn't prove to be an easy one. The media takes an interest in the pairing, ex-girlfriends arrive back on the scene and Sophie faces the constant battle of not feeling good enough to date a celebrity. When Sophie is thrust in Billy's showbiz world, she is forced to question whether their relationship is strong enough to survive.
I'd been looking forward to reading Billy & Me since falling in love with its gorgeous cover. It screams classic chick lit and I wasn't disappointed as I started to read. I instantly warmed to the character of Sophie, who is clearly suffering from some sort of trauma in her childhood. She is quite a timid young woman but very likable and has a lovely relationship with Molly, the owner of Tea-On-The-Hill and has a great rapport with the shop's customers. The village of Rosefont Hill sounds like such a charming place, particularly the tea shop and, despite the gossip, is home to a close-knit community.
Sophie clearly has a secret from her past, which the reader is teased with for the majority of the book but, without giving away any spoilers, I was left feeling a little bit flat when all was revealed as I was expecting something 'more'. I felt for Sophie, particularly as the event shaped her entire future from then on and tarnished her childhood but I don't think it warranted such secrecy.
The only other slight niggle with the book for me was the overuse of exclamation marks. It isn't a big deal but there were so many of them that they started to really bug me in the end. But other than that, I enjoyed Billy & Me and thought it was a proper old fashioned chick lit novel with warm, fun characters in a delightful setting.﻿