Book of the Month: September 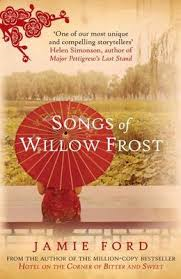 William Eng, a Chinese American boy, has lived at Seattle’s Sacred Heart Orphanage for five long years. On his birthday—or rather, the day the nuns designate as his birthday—William and the other children are taken to see a movie and he glimpses an actress on the silver screen who goes by the name of Willow Frost. William is convinced that the movie star is his mother. When William sets out to find Willow he discovers that her story is far more complicated than any Hollywood fantasy.
*     *     *     *     *
Songs of Willow Frost is an emotional tale of love and forgiveness. Twelve-year-old William has vague memories of his mother before he was taken in by the orphanage but assumes she is dead. So he is shocked when he sees Willow Frost, a glamorous actress who bears a striking resemblance of the mother William hasn't seen since he was a young boy. What follows is the poignant story of Liu Song, a young woman who is stuck in a miserable, controlled existence.
The story is set in Seattle during the 1920s and 30s, contrasting the glamorous rise of cinema with the poverty of Liu Song's Chinatown and the Depression. I quickly became immersed in the stories of William and Liu Song and while it isn't the most cheerful of storylines, I did enjoy the book immensely.
My full review of Songs of Willow Frost will be on Novelicious soon﻿
﻿
Click here to see all Books of the Month
Posted by Jennifer Joyce at 08:00