Written In The Stars by Ali Harris 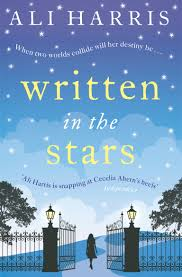 Bea Bishop is about to marry the man she loves but as she prepares to walk down the aisle, she starts to have doubts. She loves Adam but is marrying him the right thing to do? She has a painful past she has never dealt with properly and she isn't even sure who she is as a person. Swallowing her niggles, Bea begins to walk down the aisle but on her way to Adam, she slips and is knocked unconscious. Bea's world is split into two and she gets to live out both decisions of what she should do that day. Waking, the first Bea composes herself and continues to walk down the aisle to marry Adam while the other flees from the church.
While Bea is unaware that her world has been divided, we get to see what would have happened with each decision she made, whether she stayed and married Adam or changed her mind and fled. The basic premise is very much like the film Sliding Doors and I wondered how that would translate on paper. Would it be difficult to keep with each Bea and follow her individual storyline? The answer is not at all! I quickly got to grips with each Bea (married-Adam and didn't-marry-Adam) and what followed was an interesting story of what I'm sure most of us wonder from time to time - what if...? I liked that we got to see how that one decision would effect Bea's future, the consequences of choosing each path. The two alternative lives are cleverly woven together and I liked how parts from each life started to cross, as though fate was intervening.
Bea has a painful past that she has never dealt with. Instead, she has tried to push her thoughts and feelings away but they are still there, preventing Bea from moving on. As the book moves along, we start to dig away at Bea's past and learn what happened to her. I found it quite sad at times (and not just the tragic aspects of the book) and hoped that she would get a better resolution at times, but life isn't perfect and it made me feel for Bea even more.
One of my favourite aspects of the book was the flowers, which form an important role throughout the book. Bea has always dreamed of being a garden designer but dropped out of her course for personal reasons and never picked it back up again. Flowers and gardening feature heavily in the book and I found both the descriptions and meaning of the flowers, as well as the garden design, interesting and it helped to bring Bea's lives together.
Written In The Stars is a beautifully written book that deals with some serious issues without feeling too heavy. I enjoyed the mix of characters and thought the concept made a fascinating read.﻿