Who Are You? by Elizabeth Forbes 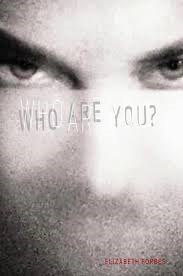 Alex has been away in the army while his wife Juliet has been at home taking care of their young son, Ben and creating the perfect home for them. Juliet has been waiting years for her Alex to come home for good so that they can really begin their life as a family, but it is soon obvious that Alex isn't quite the same man he was when he left to fight in Afghanistan. Juliet suspects that Alex is suffering from Post Traumatic Stress Disorder (PTSD) and wants Alex to get help but Alex refuses to admit that anything is wrong. Living with Alex becomes unbearable but will Juliet and Ben be able to escape and start a new, more secure life without him?
Who Are You? isn't an easy read. It's quite dark in places and some of the descriptions are quite vivid, but I found the book compelling. To begin with, I wasn't entirely sure what was going on as some of Juliet's actions are questionable, but it is clear that Alex is suffering from the effects of surviving in a brutal war zone for so long. Alex's actions make quite an uncomfortable read at times and the book wasn't quite what I was expecting after reading Elizabeth Forbe's previous novel, The Nearest Thing To Crazy but I didn't want to put the book down as I wanted to see how it would all turn out for both Juliet and Alex. I liked how we got to see both sides of the story as the narrative is split into both Juliet's and Alex's perspectives. It gave a more rounded view and I was able to feel some sympathy for Alex, despite his actions. He is a very damaged man after his harrowing experiences in the armed forces which, for me, made him an interesting villain.
The subject of PTSD is a relevant one that I haven't explored through reading until now. Who Are You? highlights the effects of both the victim and those surrounding them. The book is full of suspense, particularly towards the end of the book. I would have liked the ending to have been explored a bit more as there is such a huge build up and then the ending is over quite quickly.
Overall, I thought Who Are You? was an excellent read, full of dark twists and suspense. The writing was fantastic, drawing the reader into the lives of Juliet and Alex.﻿