And They Lived Happily Ever After? 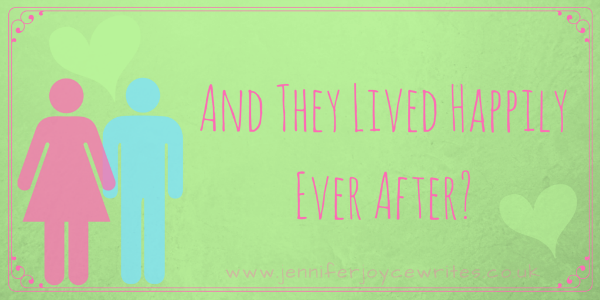 As a reader, I'm a massive fan of happily ever afters. I've invested time in the characters, have usually grown fond of them, have sometimes even fallen a teeny bit in love with them so I want a satisfying ending, for them to walk off into the sunset with the one they love. I want - no need - a happily ever after.

Of course this depends on the genre. You don't usually get a walking-hand-in-hand-under-a-rainbow kind of ending with a crime or psychological thriller. But this is why my go-to genre is romantic comedies. They're fun and comforting and you're pretty much guaranteed a tied-up-neatly-in-a-bow happy ever after (and if I don't get one, I'll be cross, believe me).

Take the film Titanic for example. Now I know the boat sinks and there weren't enough life boats so it was never going to have a cheery ending but there was definitely enough room on that board for Jack if Rose had shifted her arse over a bit. But did Jack clamber on board? No. He perished, severing all hopes of a happy ever after. I was hopping mad. I'd sat in that cinema for bum-numbing hours for a crappy ending?

I haven't watched the film since.

It's fair to say a HEA is important to me as a reader (or viewer). And I'm the same when it comes to writing my own books. Before I put pen to paper, I know there's going to be a HEA for my lead character, no matter how many bumps I happen to chuck in their path along the way. I received a review for one of my books where the reader wished one of my characters was given a happier ending and I felt bad that they'd come away without feeling entirely satisfied. I hadn't given the character an icy death like Jack, but they weren't performing cartwheels of joy either. It's made me even more determined to deliver as many happily ever afters as I can!

I asked some fellow authors how they felt about happily ever afters...

I always get my characters together early on, then throw nasty things at them so it feels like they've earned their - at least satisfying - ending. Both as a reader and a writer, I like an ending that hints at more struggle to come, but that makes you feel you know the characters well enough to believe in them coming through it.


I feel cheated if I don't get a satisfying ending and I love it when the antagonist gets his comeuppance!! One Moment at Sunrise has both.


A book has to have a happy ending or I just won't read it. And sometimes if I'm reading a book and I get scared there isn't going to be a happy ending, I skip ahead to check its safe to continue. If it ends badly, I'll just stop reading. Life is hard and messed up enough as it is, I read to escape from that, I read to give me hope that other people do get happy endings in their life, if I'm sad or fed up then I read to bring back a smile to my face. And as for my writing, happy endings guaranteed or your money back!!

I'm a massive sucker for a happily ever after. I couldn't write a story without one and I love them when I read too. If there's a sad or uncertain ending, it tends to spoil my enjoyment of the book. I hate to invest so much in characters and root for them to get their happy endings, only to have them snatched away from them!

I'm gonna play for the opposition here - I like a bit of conflict in my ending, I don't want it to be easy, I love a bit of bittersweet. The idea that there's still work to be done, that happily ever after is just the beginning of something else, and that might be difficult, but it'll be worth it. That said, if the characters don't at least get a little happiness when they deserve it, I'm gonna be peeved!

I like a HEA but a wee bit of will it last, what next is okay as well...

I don't like everything to be too neatly tied up because I want it to feel real BUT a wise editor once told me that if your reader has invested time in your book, you have to make sure that they finish it feeling satisfied and not cheated. So for me, I aim for something approximating a happy ending with maybe a little detail unresolved. It's a very interesting question though!

I tend to write as I want to read. I don't think a book needs a happy ending as long as that ending makes sense for the novel and not only for shock value. I think stories should read like real-life sometimes and not every situation has a happy ending.

So what about you? Are HEAs important to you? Or do you not mind if there isn't a neatly tied-up-in-a-bow happily ever after? Leave a comment below to let us know!