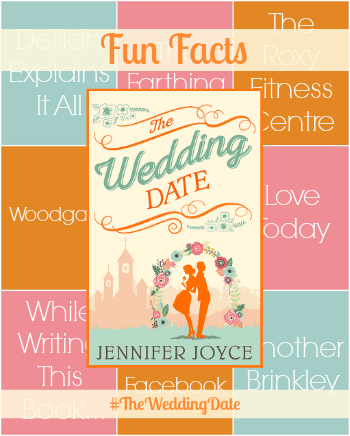 The book started off as a fun side-project. I set up a blog (called Delilah Explains It All) and started to get to know my new characters through Delilah’s blog posts. I only managed to post a handful of times but when it came time to plan a new book, I knew it was Delilah’s time to tell her story for real. You can find out more about how the blog influenced the book here or click to see the blog yourself!

Another Visit To The Farthing

Delilah and her friends spend quite a bit of time in their local pub, The Farthing, which features in Everything Changes But You. Ally and her friends enjoy the weekly karaoke night there before she makes her birthday wish.


The Animals of Farthing Wood

The Farthing was named after my favourite children’s book, The Animals of Farthing Wood by Colin Dann. The landlord of The Farthing is Colin, with Dan being one of the barmen.

The Roxy Fitness Centre – plus fitness instructors Courtney and Camilla – appear in A Beginner’s Guide To Salad.

The Wedding Date is set in Woodgate, where A Beginner’s Guide To Salad and Everything Changes But You are both set.

There was another member of the Brinkley Clan in the original draft. He was Neville’s younger brother and, unlike the other Brinkley members, he was nice to Delilah. I miss him. But he had to be cut.

In the original version, it’s Katey-Louise who starts the whole dishy-new-boyfriend-lie when she sends Ben a message from Delilah’s Facebook account.

The dating website/app that Delilah signs up to is called Love Today, which was inspired by a song by Mika.

While Writing The First Draft of This Book…

While Writing The Second Draft of This Book…

… I went on holiday to Bulgaria