The Wedding Date Quiz: Which Character Are You? 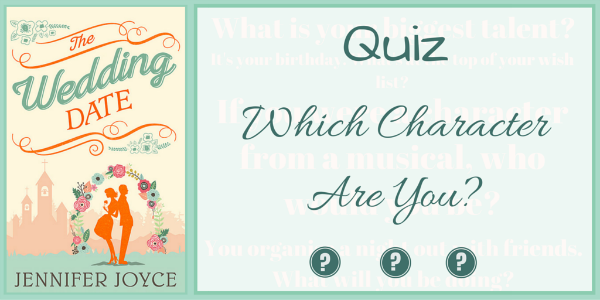 Which character from The Wedding Date are you most like? Take the quiz and find out! Do let us know your result in the comments below.

What is your biggest talent?


A) I know every word to every song in Annie


B) I'm amazing at creating fabulous hairstyles. I've got my own YouTube channel with tutorials!


D) Throwing dinner parties! It's all about attention to detail and matching the personalities of your guests perfectly


If you were a biscuit, what would you be?


B) A Rich Tea biscuit because nobody wants to be poor


C) A gingernut. Because I'm ginger (I may as well say it before anyone else does)


D) I'd be a lemon and thyme biscuit, served with cheese as they're light, sophisticated and compliment a dinner party beautifully


You organise a night out with friends. What will you be doing?


A) Watching a musical


B) Sipping champagne in the VIP area of an exclusive club


D) Dinner at a nice restaurant


You're going to an office party. Who do you bring?


A) My best friend


B) Ugh. Office parties are SO boring. I wouldn't bother going


C) I wouldn't mind going alone. Parties are a great way to mingle


What kind of pet would you prefer?


B) A chihuahua, which I'd carry around in my bag


D) A goldfish - they don't make any mess


It's your birthday. What's at the top of your wish list?


A) Tickets to see a musical


B) A new camera to film my vlogs


What do you look for most in a potential partner?


A) He has to be a good friend first


B) Money and/or celebrity status


C) Someone who makes me laugh


If you were a character from a musical, who would you be?


B) Veruca Salt because I'm a little bit spoilt


C) Working hard to land a job I love


You're Delilah James
Delilah is fun and full of life but she often has her head in the clouds and lacks direction, especially when it comes to her career. Friendship is important to Delilah - she doesn't know what she'd do without her best friends to offer advice and support - and she's also loyal in return. She's kind and thoughtful but she doesn't suffer fools gladly.


You're Katey-Louise Brinkley
Katey-Louise is driven but she can also be selfish and spoilt. She'll work hard if it suits her but she doesn't like to answer to anybody. She's strong-willed and knows what she wants and is willing to do anything to achieve her goals.


You're Lauren McIntosh
Lauren is hard-working but she also likes to have fun too. She's still young and free and without responsibility, which she enjoys. She's loves spending time with her friends and is fiercely loyal.


You're Clara James
Clara James is serious and hardworking. She has dreams and aspirations and she won't let anything - or anyone - stand in her way. She can be pretentious at times and likes to show off but she's worked hard for the things she has and sees no reason why she can't flaunt it.